If you're just dying to get some of AT&T's LTE action packed in tablet without having to mortgage your house, then Samsung may just be your new best friend. The Samsung Galaxy Tab 8.9 is coming to Ma Bell on November 20 for an on-contract price of $480, and if you pick one up early on, you can score a free Galaxy S II Skyrocket or Galaxy S II. The inclusion of the phone requires a two-year agreement, but if you're already signing a couple of years away on the tablet contract, you might as well go ahead and score a free beastly phone while you're at it. 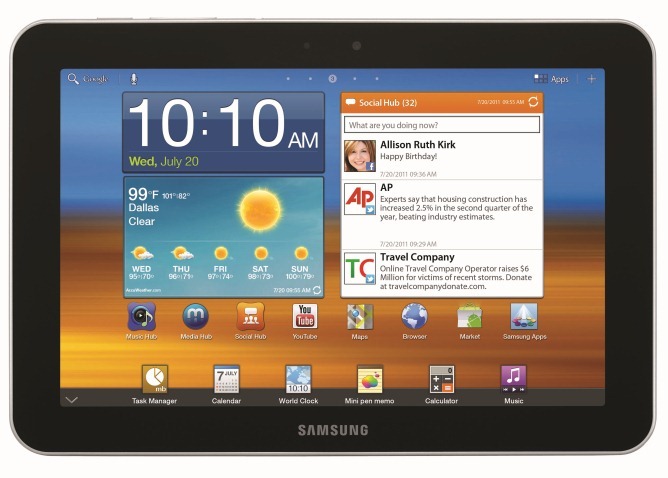 According to the AT&T press release, the LTE Tab 8.9 will come with a 1.5GHz dual-core Snapdragon instead of the Tegra 2 like the Wi-Fi version; I'm a bit skeptical of this chip-changeover, so I've pinged AT&T for clarification and will update when a response is sent. Otherwise, the specs are pretty much the same as the Wi-Fi Tab 8.9:

Update: AT&T confirmed that the processor is indeed a 1.5Ghz dual-core Snapdragon.

The release of the Tab 8.9 will also be accompanied by the launch of AT&T's hyperfast LTE network in six new markets, including Charlotte, NC; Indianapolis, IN; Kansas City, MO; Las Vegas, NV; Oklahoma City, OK; and San Juan, Puerto Rico.

· Customers can purchase from AT&T stores and online beginning Nov. 20.

· AT&T offers the only devices capable of 4G speeds utilizing both 4G LTE and HSPA+, for a consistently fast connection in and out of 4G LTE areas.

· AT&T topped its goal to offer 20 4G devices this year. The addition of the new 4G LTE devices brings the 4G device total to 24.

AT&T tablet customers can choose a $35, 3 GB monthly data plan option with a two-year contract, and customers who do not choose a long-term commitment may still select one of two existing monthly billing options for tablets:

· Postpaid: $14.99 for 250 MB or $25 for 2 GB. Customers on the 2 GB plan who exceed their monthly data plan will be charged $10 per 1 GB of overage. Charges will appear on customers’ monthly wireless statements offering the simplicity of a single bill.

· Prepaid: $14.99 for 250 MB or $25 for 2 GB. Customers on the 2 GB plan who exceed their monthly data plan may choose to purchase an additional 2 GB for $25. Charges will appear on customers’ credit card statements.

· DataPro provides 2 gigabytes (GB) of data for $25 per month. An additional 1 GB of data is $10. Customers who want to use their device as a mobile hotspot can sign up for DataPro 4GB for $45 a month, which lets you tether or share your data connection across multiple devices.

AT&T is the only U.S. carrier providing 4G using both HSPA+ and LTE technologies. HSPA+, when combined with enhanced backhaul, provides customers with compatible devices 4G speeds, meaning customers get a faster and more consistent 4G experience, even when outside of an AT&T 4G LTE area. Customers of other carriers that have transitioned to 4G LTE without further speed upgrades to their existing networks are likely to see a jarring drop-off in speeds when they move out of LTE coverage.

YouTube App Updated, But Now It Doesn't Show In The Market For Many Devices - Download It Here