There's no doubt that the Tegra 3 is going to be the reigning champ of mobile chips when it's released -- its quad-core setup and brilliant design offers the best of both worlds where performance and battery life are concerned.

For low power tasks, the fifth core, known as the companion core, runs the show; as more powerful processes come into play, the high performance cores activate and deactivate as needed. For things like playing music, watching video (even streaming 1080p), the companion core takes care of the job. For web browsing, one or two main cores may activate depending on activity. For gaming, of course, all four cores will be running fifth-gear-full-throttle, to bring the best experience possible. We've already covered this in detail, but I wanted to remind you of the goods before we get into the nitty gritty: gameplay.

The Tegra 3 packs a 12-core GPU, making the graphics engine an absolute monster. You can imagine what this is going to mean for game developers, as more power means more fun. NVIDIA has now released some new details about the Tegra 3 to display its raw power, including some video footage of what game devs were able to make possible with the T3 over current architecture like the Tegra 2.

Remember the Glowball demo from the early days of Tegra 3 (then called Project Kal-El)? That was just the tip of the iceberg. Glowball has since gone back to the lab and the team added so much graphical depth it will blow your mind. Check this out:

Everything is smooth, fluid, and dynamic using the Tegra 3. Glowball is just once example of what the T3 is capable of -- check out what these devs have done with their games:

Shadowgun is already among the most impressive games on Android-powered Tegra 2 devices, but the Tegra 3 brings a whole new realm of possibility the the game. New environments, enhanced physics, and more realistic graphics are just a few of the things to expect from the T3 version of the game.

The same can be said for Riptide GP -- the graphics are better, gameplay is smoother, and the effects are in full force. Enough babble, it's video time.

Like the others, there will be a version of Bladeslinger available for Tegra 2 devices, but a Tegra 3-exclusive version with enhanced features, graphics, and effects will be available as well. Rich environments, smooth gameplay, and realistic graphics? Yes, please.

If you're anything like me, you hate on-screen controls for games. The Tegra 3 takes care of that issue, too -- it has built-in support for a variety of game controllers, including PS3, XBOX 360, Wii, Logitech, and more. With this inclusion, you'll be able to grab your Tegra 3 device, hook it up to the closest HDTV via HDMI and play right there on the TV. 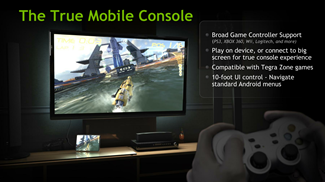 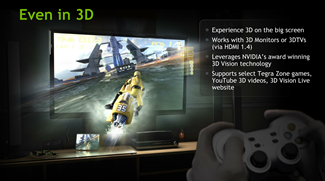 Have a 3D TV and want to take advantage of the extra D? No problem -- Tegra 3 has 3D support built in. Watch applicable YouTube videos and play select TegraZone games while taking advantage of the added features of your 3D HDTV or monitor. Bam.

Just for fun, the NVIDIA team threw together a video of some pretty common tasks and how they fare on the T3 versus the "competitor" chip (let's assume it's the Tegra 2). Let's just say that the results are far from disappointing -- the Tegra 3 slays the other chip in basically every way.

How's that for desktop-like performance? I honestly believe that the Tegra 3 will make it possible to leave the laptop at home; the chip is just so powerful, tasks that once required traditional computers will eventually become commonplace on mobile devices.

Hands-On: The Samsung Galaxy Tab 7.0 Plus Is An Exynos-Packing, Benchmark-Decimating Speed Demon