HTC's UK Facebook page was updated last night with information regarding just which HTC handsets would be in the "first wave" of phones to receive an update to Android 4.0 Ice Cream Sandwich in early 2012. While the post was made on HTC's UK Facebook, the list contains a number of US-only devices. Those handsets are asterisked to indicate US-only availability (the Rezound, EVO Design, and Amaze). The others on the list include the Sensation (plus XL and XE versions), the Vivid, and the EVO 3D. Those phones are not asterisked, indicating the ICS update will be making its way to the European versions of those phones around the same time frame as well. 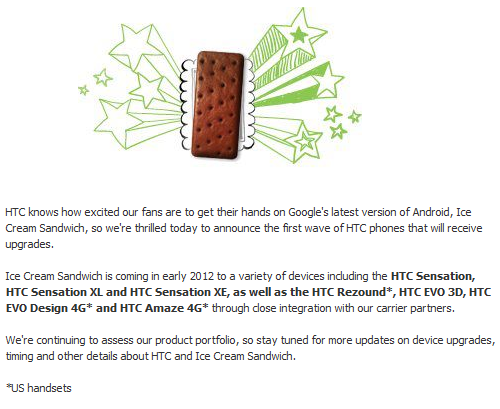 However, it could also be interpreted to mean that the US versions of the Sensation and EVO 3D may not be in the early 2012 time frame. Of course, we could just be reading too much into the wording, and it may just include all versions of those devices worldwide. HTC's US Facebook would seem to indicate this includes US versions of the EVO 3D and Sensation as well.

Who didn't make the short list? The EVO 4G, ThunderBolt, Incredible 2, Inspire, Rhyme, and EVO Shift. While we can't say for certain these devices won't get Ice Cream Sandwich, HTC has practically signed their OTA death warrants by indicating they won't be in the first round of update candidates.