Samsung was kind enough to send a Galaxy Tab 8.9 our way for review last week ("surprise!"), and I have to say: this thing is thin, light, sexy... and Samsung's custom user interface (UI), TouchWiz, is not fit for tablets.

Let's take a quick look at the specs: 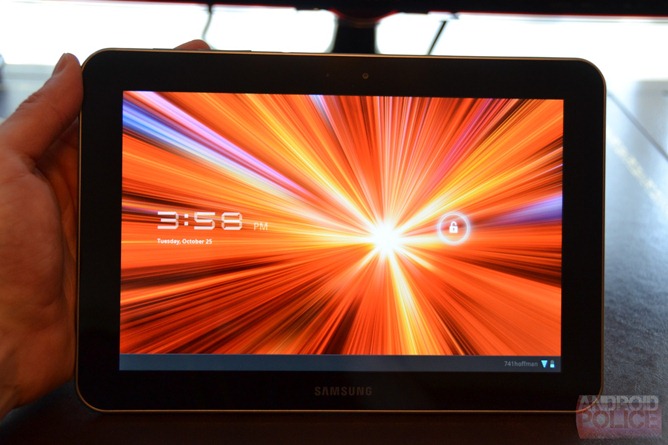 The specs may be fairly standard by now, but they still power Android every bit as well as they have in the past. What makes the Tab special, then? Two things, really: sex and size. See, the 8.9's big brother - the 10.1 - was released to much fanfare about it's supermodel-esque dimensions, and the 8.9 follows suit; it's fairly light (15.8oz, or roughly a pound) and impressively thin (8.6mm, or about 0.3"). But perhaps more importantly, it distinguishes itself by being the only contender in the 9" tablet arena. In fact, other than being 1.2" smaller and slightly lighter than the Tab 10.1, the 8.9 is nearly identical. 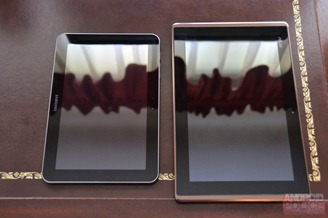 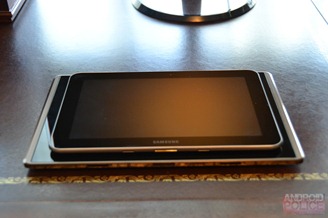 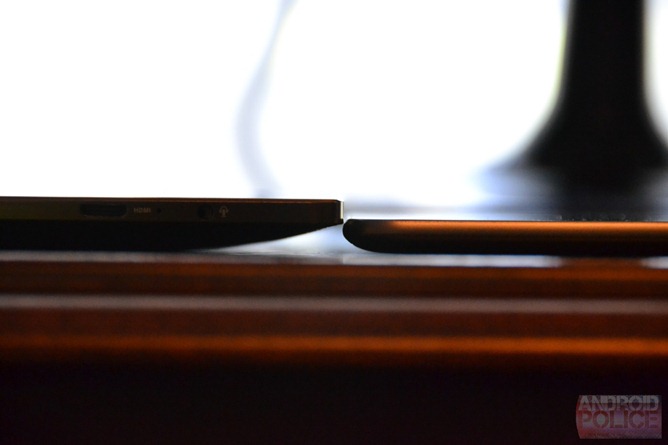 Still, that's not necessarily a bad thing. The Tab 10.1 was virtually universally praised as being an excellent device, with reviews at launch lauding it for being fast and responsive despite its substantially more svelte proportions than its only other competition at the time, the Motorola XOOM. As the 8.9 is (again) basically a slightly smaller 10.1, you can and should expect the same experience. 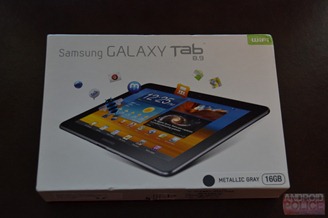 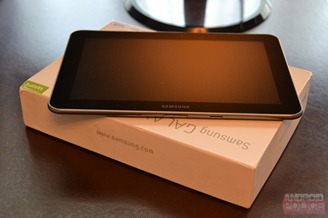 You would think having the same experience would be a good thing, and to an extent, it is. Apps open with gusto and run well. Running high-end graphically intensive games is a sight to behold, with the Tegra 2 packing some serious punch in the graphics department.

What's not a good thing is TouchWiz. And that's the crux of the Samsung Tabs: they should be every bit as snappy as the reviews (most of which came before the TouchWiz update) portray them. But they're not. Samsung essentially eschews performance in favor of fashion by slapping their custom overlay on top of the already-beautiful Honeycomb UI. (In fact, I find stock Honeycomb to be more attractive than TW, though TW does add some useful widgets and features.)

TouchWiz is such a burden that when doing any basic tasks, the 8.9 stutters and lags. Swiping between home screens - even if there are no TW widgets on the original or destination screens - stutters nearly every single time. Rotating the screen? Be prepared to wait a second for it to reorient. Backing out of an app to go back to the home screen? Expect a minor delay and a bumpy ride. To be fair, it's never particularly atrocious, but it's always noticeable, and compare it side-by-side to any of its competitors and you will be disappointed. It's also worth nothing that an update to Android 3.2, if it comes, would likely improve things, though probably not solve them completely. 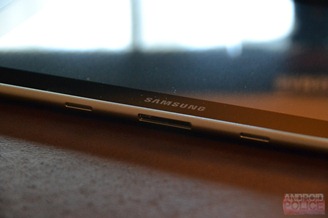 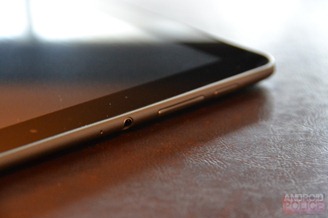 Historically, Samsung's high-end offerings are well built, and the 8.9 is certainly no exception. Despite the slim profile and relatively light weight, it feels extremely solid and sturdy, with no give. The lack of a "unibody" design doesn't hurt things, as the pieces are fit together so snugly that it virtually is unibody. 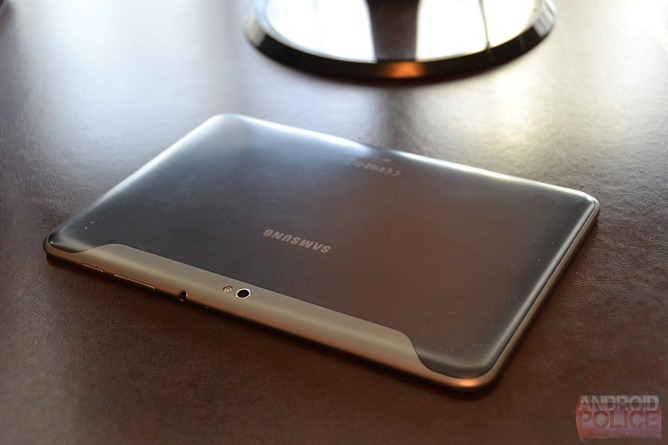 When held horizontally, the power button, volume rocker, headphone port, and mic hole are on the top, and there's a front-facing camera along the top of the front face. The speakers and MHL port are on the bottom, and the rear camera and flash are along the top of the back. There's a major emphasis on pure sex here, and physically speaking, it pays off without any consequences.

As mentioned above, the Tab is impressively thin and light, attributes that are especially noticeable when compared directly to other tablets. In practice, though, these attributes don't make the world of difference you'd expect. About the only time I would expect it to make a difference is when you're going to be holding it up for extended periods with no way of propping or supporting it, or in the hands of a young child. Despite the limited functionality of the slimness and lower weight, it does put the Tab ahead in sheer aesthetics, something many people (myself included) value quite highly. 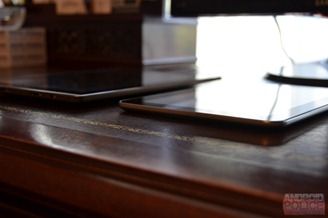 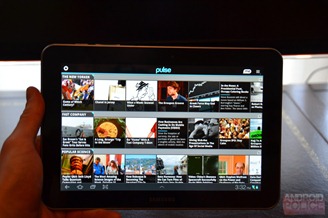 As with the Epic 4G Touch, battery life is very impressive. Whether the 8.9 is idling or being used heavily, you can expect the battery to last quite a while. As all quality Android tablets at this point use virtually identical chipsets, I'm not sure what type of tomfoolery Samsung is using here to make the battery life so great (likely better sync/update management), but it really is noticeably better than the competition. Unscientifically, I'd estimate that the 8.9 gets about 20% better battery life than the Transformer when in use, and about 50% better while it's idle. With brightness cranked to about double the "automatic" setting, you can expect the Tab to outlast your reading/browsing - I experienced about a 10-12% drop for every hour I spent browsing feeds, the web, and using Google+/Facebook/Twitter. Gaming is obviously more demanding, but nothing to worry about, especially if you're playing a less resource-intensive game. 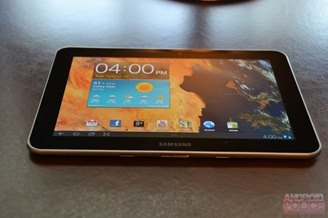 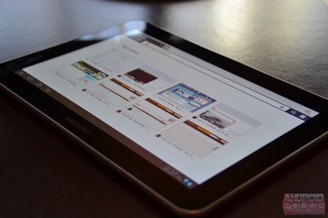 Samsung is known for bright, crisp screens, and the 8.9 doesn't fail to deliver in that respect, either. As it maintains the same pixel count (1280x800) as its larger brethren (and competition) in a smaller package, it packs a higher pixel density. (Whether the additional density is necessary is arguable, as 10" tablets with the same resolution still seem plenty crisp.) Consequently, the display is about as sharp as you can find on a tablet at the moment. Coupled with Samsung's highly saturated image processing and a bumped up brightness setting, the screen is impressive, though not enough so to stand substantially above the competition. 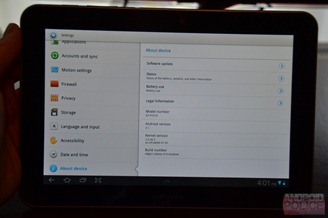 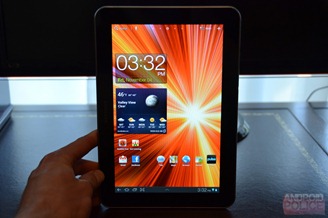 At just 3.0MP, you're probably expecting me to tell you the camera is crap... and if so, you're right: it is. Performance is especially poor in medium- and high-light situations, never lighting the picture properly and taking quite a while to "focus" and snap the picture. "Focus" is in quotes there because I use the term loosely - it doesn't really; that is to say, the subject of the shot generally remains blurry, whether it's in motion or not. Seriously - I just took of my desktop speaker, and although it was in the focus box, the (currently off) speaker looks like it's mid-earthquake. All that said, it's a camera on a tablet. It might work in a pinch, but if you have your tablet with you, chances are you have your phone handy, and/or a real camera.

The Tab 8.9 is a slim, sexy tablet with a lot of potential, but it's held back by a slow (albeit occasionally functional) custom UI. So, why would anyone buy the Tab 8.9? Casual consumers may not be particularly miffed by the comparatively slower performance, or might feel a 9" device is more comfortable. Others may be willing to accept it in exchange for the sheer sex appeal, or because they plan to root and remove the UI (or overclock). 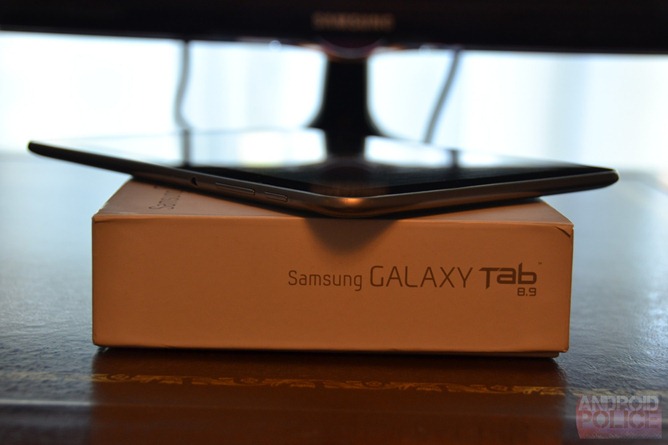 Whatever the case, it's likely that those who purchase the Tab won't find the experience unenjoyable. On the contrary, they'll likely be happy with their purchase, and for good reason. Those in the market but not overly concerned with sex appeal and size, though, may want to look elsewhere - 10" tablets can be had for cheaper and often without a UI that bogs things down.