Android’s massive worldwide popularity has, in large part, the availability of cheap, low-end handsets to thank. We all know this. In developing markets in Southeast Asia and Eastern Europe, Android powers almost all of the smartphones that are being purchased by growing numbers of prepaid subscribers.

Cheap Android phones are, for that reason alone, a great thing. They’re empowering consumers in developing economies, giving them access to the full web wherever they go - something that has generally been the privilege only of the wealthy and of Western nations in the past decade.

But there’s a dark side to cheap Android phones here in the good ‘ol US of A. Unwary consumers are being taken advantage of and, frankly, screwed into 2-year long deals with junk phones that may not even live to see half of that contractual obligation fulfilled. To illustrate this point, let's take a look at a few devices over on T-Mobile. 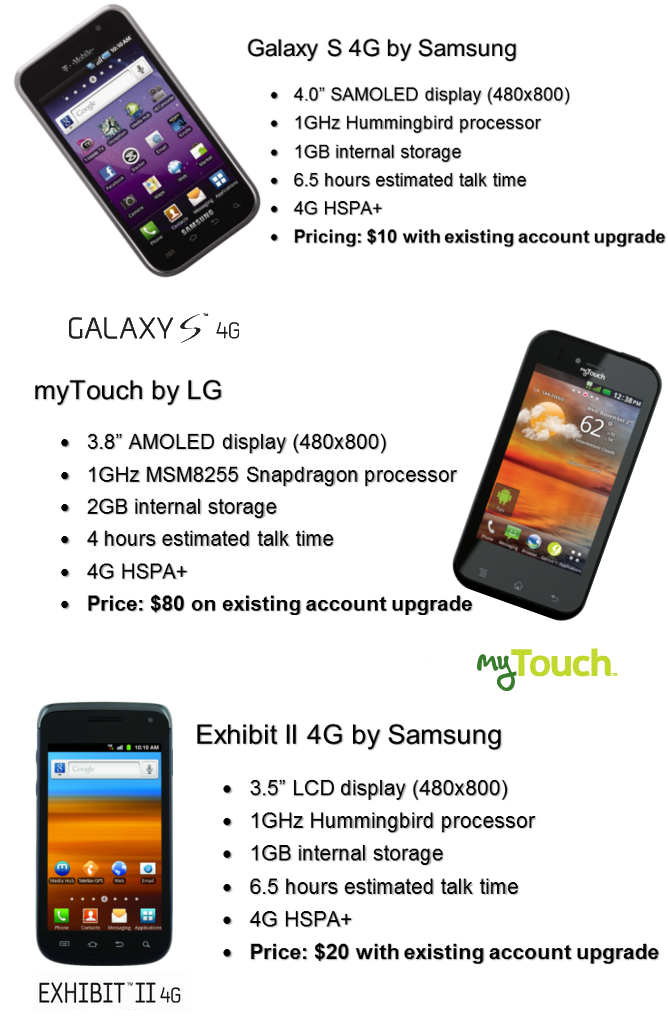 Data based on pricing by Wirefly.com

To me, this pricing structure makes no sense. The myTouch by LG is $70 more than the Galaxy S 4G, a device that is definitely a "beefier" piece of hardware. While the myTouch does boast a bit more internal storage and runs a newer version of Android, it's clearly being marketed as a low to mid-range device, not a flagship handset. When the GS4G was released (about 9 months ago), it was T-Mobile's biggest and baddest handset, sporting a 4" SAMOLED display and 4G. Now, the device is nearing (or has reached) the end of its production cycle.

What's wrong with it? Nothing - it's just old, and T-Mobile now has the Galaxy S II to fill the niche that the GS4G once did. Things get even more ridiculous when you compare what these phones sell for right now, sans-contract:

MSRP is reflective of the device's intended price point and quality. High-end devices are usually between the $450 and $700 mark, while mid-range and low-end handsets usually land anywhere from $200 to $350. While the Galaxy S 4G's MSRP has obviously decreased since its release, it's still significantly pricier than either the myTouch or the Exhibit II.

And yet, on contract, it's cheaper than both. How does this make sense? Well, T-Mobile is obviously looking to clear out stock (as is Wirefly), but I don't think this somehow justifies the prices of these low-end phones. Manufacturers and carriers clearly make a killing off these budget Android devices compared to much pricier, more powerful cousins. And no matter which of these phones you buy, you'll end up with the same data and minute pricing.

Granted, if you go into a T-Mobile store and look at the Galaxy S 4G (if they still stock it), it'll probably be priced higher than either of these phones on a 2-year agreement. But as any frugal shopper knows, carrier stores are a rip-off.

This leads me to one, inescapable conclusion: budget Android phones are absolutely screwing consumers on major carriers. There's just no reason to buy one. An older, high-end handset just makes way more sense if you're trying to pinch pennies on your next smartphone. Why buy some new piece of crap when you could buy something that's older but probably more powerful, better built, and with a larger display?

If you're purchasing off-contract on a regional carrier like MetroPCS or Virgin, low-end phones make sense. But they don't make sense any way you slice it on a major US carrier - there's no discount for remaining off contract anymore, so there's really no powerful economic incentive. But freedom to switch carriers, you say, contractual servitude! And what if I want to switch carriers before my contract is over? ETFs! It's time for some math.

The difference? You'll actually save money by going on contract and suffering the ETF. And you get to use a better phone that will probably last longer, resell at a higher price, and doesn't carry the stigma of a low-end smartphone. How does this even make sense? It doesn't. Budget smartphones are being used to take advantage of consumers' desire to save money, and if anything, they'll probably end up costing you more in the end - when they break halfway through your contract.

[Monthly Home Screen Challenge] And The October 2011 Winners Are...