If you're anything like me, your Android handset has completely demolished the need for an mp3 player, you're constantly adding and removing files from your device, and you find the process of plugging your phone or tablet into your computer via USB to be tedious, if not tiresome.

Luckily, there are a variety of apps in the Android Market that allow users to sync files wirelessly between their computer and Android devices. My Sync Center is one such app, bringing convenient, sophisticated sync functionality to you in a lightweight, easy-to-use package.

My Sync Center is, if nothing else, a no-frills solution to your wireless syncing needs. When I say the app is lightweight, I mean it rings in at a teeny tiny 1.15MB once installed. It has a simple interface, both on your device and on your desktop. Setup is a breeze, simply requiring the user to join the same Wi-Fi connection as the computer they wish to pair with, and enter a code. Once that is accomplished, you are pretty much set.

After setting up My Sync Center on both your desktop and mobile device, it's time to start syncing. Initially, you'll be given the option of syncing photos, downloads, ringtones, notification sounds, music, and a few other items, but really you are free to add as many folders as you like. The user can also set My Sync Center to sync automatically at various intervals, from hours to weeks, or choose to "Always Sync,"  which initiates a sync each time your device is unlocked. 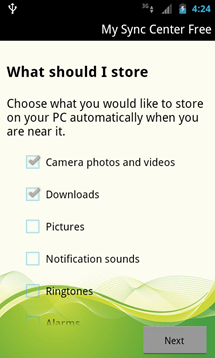 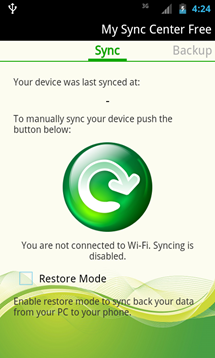 Besides the ability to simply sync files and photos, My Sync Center offers great iTunes compatibility, allowing users to sync songs, artists, or playlists to their device quickly and easily. This functionality, in my opinion, takes My Sync Center one step up from more basic syncing options. By offering individual categories of music, MSC has effectively eliminated the hassle of seeking out songs or albums as individual file sets to sync, replacing it with an easy, workable solution. 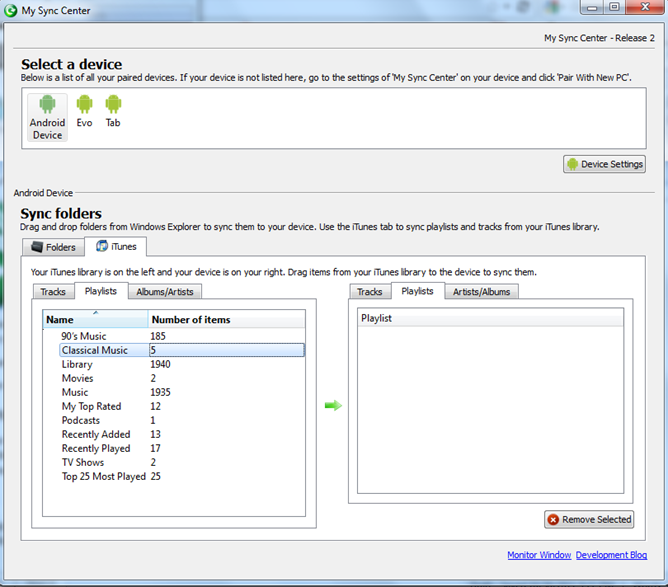 Lastly, My Sync Center offers a "restore mode," which will grab files from your device's  backup folder on your desktop, and return them to your handset, in case they have been deleted for whatever reason. This is a handy feature, and while I don't see myself taking advantage of it very often, it at least offers peace of mind to those who want to be absolutely sure their data is backed up, and also want an easy way to restore it, should the need arise.

There's no doubt My Sync Center is good at what it does. I'm just not wowed by how much it does. That being said, it has all the features I feel like I need in a syncing solution, allowing for effective, relatively quick backup and restore of files, and a great system of music syncing.

While there may be syncing options that offer more bells and whistles (message sync, for example), My Sync Center is a capable, relatively inexpensive app, coming in at just $1.98  in the Android Market, and is definitely worth a look. If you aren't ready to commit to purchasing MCS, the developer also offers a free version, albeit with severely limited functionality. It is also worth nothing that only Windows machines are currently supported, but the developer assures users that OS X and Linux support are on the way.