About a month after CUKETA got us excited about Age of Defenders, their unique new take on tower defense has hit the Android Market. Of course I had to get a copy and check it out for myself. I wasn't disappointed.

First of all, Age of Defenders is gorgeous. The menus, loading screens, and of course the gameplay environments are all extremely polished and look great. Besides its aesthetic appeal, Defenders offers a lot in the way of functionality. What's unique about this game is that it's a hybrid between tower defense and strategy, making you both the defender and attacker at once, while competing against other players online.

The game allows you to play in one of two modes: practice or multiplayer. Practice mode is just what it sounds like - allowing the player to hone their skills while working through a series of missions, while multiplayer allows you to create or join a match with other players.

AoD's Practice Mode is, as you may expect, a series of practice rounds, played against a dummy computer. The first mission is a tutorial level, that walks the player through gameplay quite effectively, offering explanations and instructions at every turn, to provide a firm grasp on the basics. From there, the player can continue to more challenging missions.

Practice Mode, past the initial tutorial, feels more like a single-player mode, and indeed, the heading switches to say "Single Player" as soon as you tap the "Practice" button. 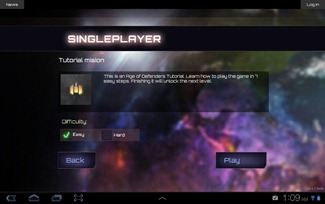 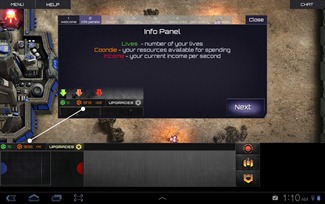 It's worth looking at the actual gameplay a bit closer before we go any further. First off, things are set up a little differently than your average defense game. All the controls are situated along the bottom of the screen, giving you access to a handy swipeable radar-esque map of the playing field, as well as towers, attack nodes, and "units."

The towers are what you'd expect - a bevvy of gun and laser turrets, upgradable using the game's fictitious currency. If you're running low on currency, there are mine turrets, which speed up your earning power. Attack nodes are essentially the base from which your units spawn. Units include various tank-like vehicles, some equipped to shoot at enemy turrets, some designed to simply speed toward the enemy base. Attacks can be planned with great accuracy, even allowing the player to plan a route by which the units will travel.

The variety of mechanisms available to the player keeps things dynamic, while not getting overly complicated in the details.

Multiplayer mode is where Age of Defenders really shines. Being able to play against real humans online makes it much more dynamic, interesting, and simply more fun than other tower defense games.

Once you select multiplayer mode, AoD takes you to a group chat, where you can talk to other players and find opponents. You can either host or join a match, depending on who's ready to play. 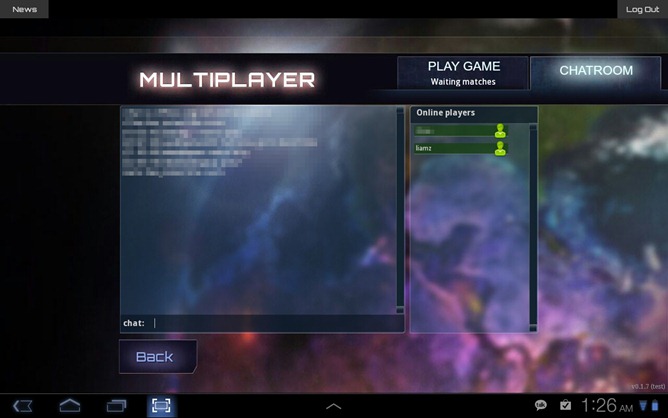 Once you get a match going, the action can begin. The player is completely free to build, plan, and attack at any time. I can honestly say that AoD's one-on-one matches are fun. Without the predictable wave indicators we've come to expect from the tower defense genre, there's a lot more tension, and the player must constantly be on the lookout for action. Further, Age of Defenders' functionality and overall gameplay dynamic work really well, and are fairly intuitive, especially if you've played through the tutorial levels mentioned earlier.

While the gameplay here is awesome, victories seem a bit hollow. Upon winning a match, the player is greeted with an itty bitty victory popup, which I don't think exactly lives up to the visual fanfare the rest of the game offers. It's a small nitpick, but it's really the only visual flaw I could find.

Age of Defenders is a great game, well worth the wait. Not only is it genuinely fun, but I feel that it actually brings a lot to the table, above more typical tower defense games. Its aesthetics are polished, crisp, and complete, and the game stays interesting thanks to its online capabilities, and a nice variety of weapons and units. Besides all of that, it's a great game to simply pick up and play. The matches are brief, yet action packed, and since players can connect using PC, Mac, Android, or iOS, there should be plenty of people around to start a match with.

At just $2.99, Age of Defenders is by all accounts a reasonably-priced game, and well worth the purchase.

[Update: Here Are The Winners!] Review / Giveaway: Win One Of Ten Cases Of Your Choice From ...

Patent Trolls: What Is Lodsys Actually Asking App Developers To Pay? You Might Be Surprised