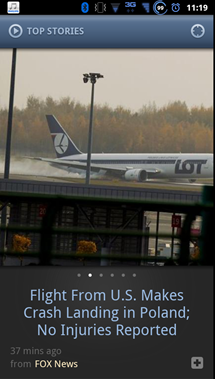 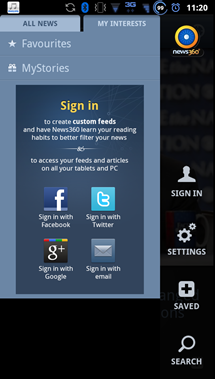 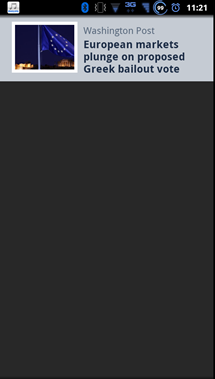 Next, in-app video support has been added for articles with embedded video (or video stories). The final major new feature is the ability to save articles to a "read later" list (which syncs to all of your devices), which I know I'm going to be utilizing heavily. You simply tap the "+" symbol at the bottom right of any story. Here's the Market changelog:

You can check out the press release, below:

News Gets Personal with News360 2.0, Now for iPhone and Android Smartphones

With the smartphone upgrade, News360 2.0 allows users to save their interest graph and sync it across their mobile phones, tablets and the Web. Users can also share parts of the graph with their friends, allowing them to integrate the results into their own news experience.

News360 2.0 for iPad and Android tablets, released in August, has received a 5-star rating in the AppStore across more than 3,000 reviews. The free app is available from the App Store and AndroidMarket, and on the web at news360.com.

“Users have really responded to the personalization in News260 2.0. On tablets and on the web, our ‘reverse search engine’ approach that monitors the web for things that might be relevant to you, has helped our users get the stories that matter to them without losing the big picture,” says Roman Karachinsky, CEO. “We know you don’t have time to get to everything you want to do. So we’ve made sure you can read what you want, when you want it, no matter what device you are using.”

News360 uses linguistics and semantic analysis to understand more than 700,000 entities and 150,000 unique articles daily, looking at the quality of the writing, tone, subject, source, author and much more. News360 has been downloaded more than 800,000 times.

About News360 News360 is a popular newsreader for use on smartphones, tablets and the Web that presents a comprehensive look at the most important news of the day around the world, and the most important news of the day as it relates directly to its users. The app analyzes more than 150,000 articles from 10,000 sources daily and ranks them according to quality, relevance and freshness. News360 uses the social cloud to build unique interest graphs for each user, helping them discover new content, sources, and interests. News360 is available for the web, and all major mobile platforms, including iPhone and iPad, Android Honeycomb tablets and Android smartphones, BlackBerry PlayBook, and Windows Phone 7 devices. News360 is privately held. For more information, visit www.news360app.com.

Tip: Is Your Android Market App Loading Slowly, Especially On Wi-Fi? Give This Fix A Try

[Updated] Editorial: Full Disclosure - Should Developers Be Required To Disclose That Apps Are ...