Over the past week, I've been in contact with Sprint about the demise of their network's data speeds, especially in the 3G department. As many of you were also in the same boat, we saw quite a bit of interest and started collecting information on the situation, which resulted in this knowledge dump on Sunday - read it if you haven't yet done so.

Among the tidbits of info Sprint techs let out, one was especially interesting - a round of tower upgrades that were supposed to be completed on October 31st. We were skeptical. Many of you were as well. But could it be... did Sprint actually roll them out on schedule and they actually helped?.. (I want to hear gasps here, people!)

This morning we've received multiple tips, including this GoodAndEVO post, of EVO 3Ds self-triggering profile updates (from what I understand, a profile is a set of parameters that tells the phone how to connect to the network) and subsequently seeing much improved data speeds. Having heard that, I started running tests in the Bay Area locations that recently dropped to less than 100kbps, using both my EVO 3D and the Epic 4G Touch.

The results were a mixed bag, but one thing is certain - network throughput and congestion have certainly improved, and by a whole lot in some places. Seeing lower latency and speeds above 500kbps put a twinkle in my eye - it's still not where 3G is supposed to be, but the network is actually usable for me again today (not everywhere, but in many places it wasn't only a week ago, but then again - it could take a week or two for all upgrades to go through). 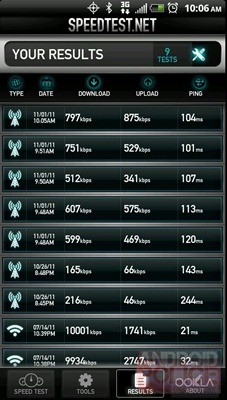 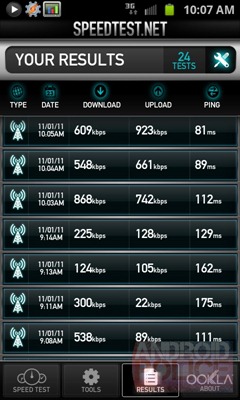 And here is me using Wi-Fi tether:

Now, I realize these results could be limited to the Bay Area (congratulations, BA folks), but it seems like the network improvements rolled out far beyond it - it looks like October 31st was the magic date more than just here. So, how about you? Please update your profiles (Settings > About > System Updates > Update profile, then test your speeds a few times using the SpeedTest.net app, try a couple of servers around you, and report back with your locations (and, ideally, screenshots).

We've also reached out to our Sprint contacts to get some clarity and possible confirmations of any network upgrades.

Don't stop here, Sprint, and maybe we'll stick with you after all. The most important thing you can do now is not slow down, keep the upgrades rolling, and catch your network up to at least the levels you yourself advertise.

Tip: Is Your Android Market App Loading Slowly, Especially On Wi-Fi? Give This Fix A Try