Well, this didn't take long. A little while ago, a new app called AppExtractor that can restore individual apps from ClockworkMod backups appeared in the Market seemingly out of nowhere. The app was welcomed by many of us who do custom ROM flashing here and there, sometimes wishing we could only restore a few little things from our Nandroid backups rather than having to restore whole ROMs.

As of today, Titanium Backup, sort of a de facto app in the app backup/restore business on Android, can now do the same thing. Well, kind of - it can do a little subset of what AppExtractor can do at this point, but it's a great start. Yup, TB can now restore individual apps from CWM backups, although limited to version 5 at the moment. This leaves out CWM version 4, as well as restoring SMS and MMS, but the latter really isn't TB's job.

Check out the screenshots (I didn't have a CWM 5 backup handy, unfortunately) and grab the updated app in the Market. 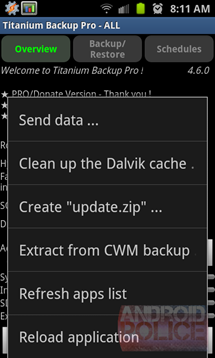 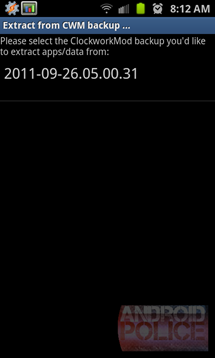 Barnes & Noble Having A Breakfast NOOK Event On November 7th, But How Will All Those ...

Attention Devs: Need Help Testing Your App Before Launch? Apkudo Can Run It Through Nearly 300 ...