The Android 4.0 API that was released together with the unveiling of the Galaxy Nexus also brought us, developers, ADT 14 and SDK Tools r14, which quite a few people started having problems with almost immediately. The tools were released in an incomplete state based on my experience with ADT 14-preview, as some serious and known bugs weren't fixed when 14-final came out. I have a feeling the ICS event kind forced the corresponding ADT/tools 14 release and prompted Google to roll it out in what I consider a broken state (many reported crashes, broken Logcat, etc).

Thankfully, the tools team (hi, Tor and Xav!) persistently worked on the issues and just released ADT 15 and SDK Tools 15, brining much relief to those of us experiencing said problems (the un-pausable scrolling Logcat was killing me in the last few weeks). 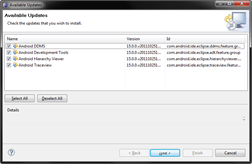 Here is what the updates bring to the table.

Dependencies:
ADT 15.0.0 is designed for use with SDK Tools r15. If you haven't already installed SDK Tools r15 into your SDK, use the Android SDK and AVD Manager to do so.
Bug fixes: