Google Talk is one of my favorite parts about Android. If you have other Googly friends, between Android, Gmail, and G+, they are almost always available. In Android 2.3.4, Google Talk got a big upgrade in the form of voice and video chat.

There will be many similarities to the to the Ice Cream Sandwich version of Gmail, which was the subject of Part 1 of this series. So go read about it or risk falling behind the rest of the class. Just like that article, Gingerbread is on the left, Ice Cream Sandwich is on the right. The ICS pictures are all from the emulator, which has the occasional rendering issue, so don't judge too harshly.

With the disclaimer out of the way, lets get to it. First up, the about screens: 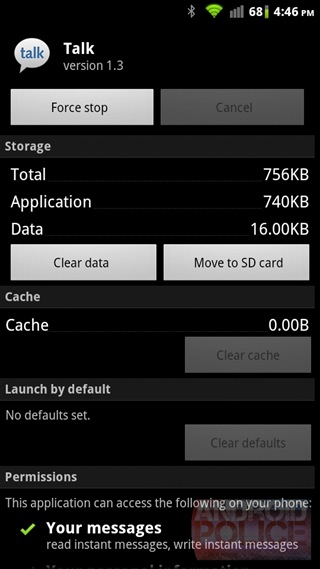 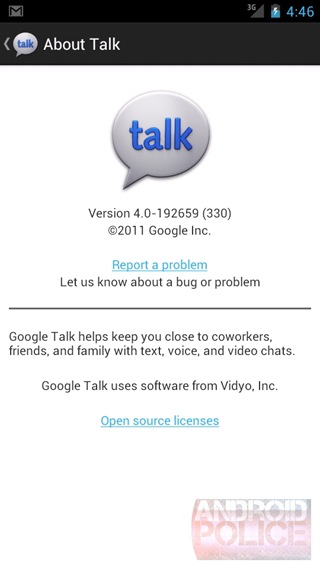 We're moving from version 1.3 (Google Talk with Video) to a suspiciously high 4.0. Apparently "Vidyo, Inc." powers the video chat. It's pretty rare for Google to partner with a company like this. Usually they roll up with a dump truck full of cash and buy the company or, if they resist the buyout, Google just copies them and crushes them.

The Gingerbread version of Google Talk is, in a word, grey. The header, your name tag, the background, the mobile indicator - everything is grey. ICS brings a much brighter and higher contrast design that looks less like a rainy day and more like a pleasant, modern app. 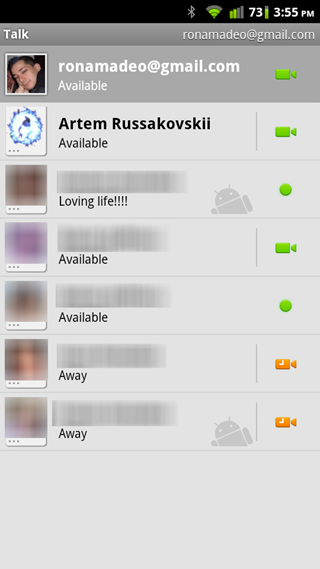 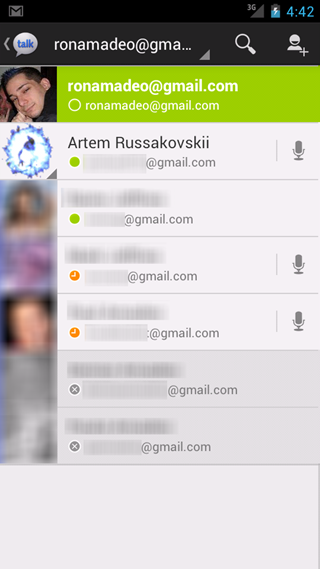 Wow. Check out that big, green, "YOU ARE ONLINE" status header. That's intense. It turns the appropriate color depending on your status. You will never, ever wonder if you are online or not. And if you think that's bright, check out what happens when you are set to "Busy":

What color would you say that is? "Nuclear Red"? Whatever it is, it's bright. And remember, it's this bright on your crappy LCD monitor, imagine a super vibrant AMOLED.

ICS kills the generic "Available/Away/Offline" status under each name and replaces it with a status circle and an email address. The generic statuses were pretty redundant, but I don't see how an email address is any more useful. If you have a custom status that will show up instead of your email address.

I'm kind of sad to see the death of the little Android guy next to mobile users. It gave the app a little character. Now, from the friends list, there's no way to tell who is mobile and who isn't.

Pretend the microphones in ICS are video cameras, you can't (or at least, I can't) emulate a front facing camera. So Talk drops to voice only mode. 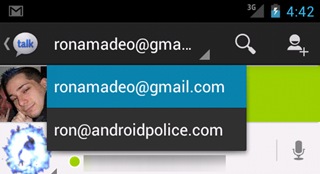 At the top of the app you get the ICS standard app icon/back button, which, if you remember from Gmail, is an app-level back button. Next to that you get the dropdown account switcher, also like Gmail. Oh yeah, new feature alert: Talk now supports multiple accounts. Next to the account switcher is a search button (for contacts or chat keywords) and invite to Google Talk. 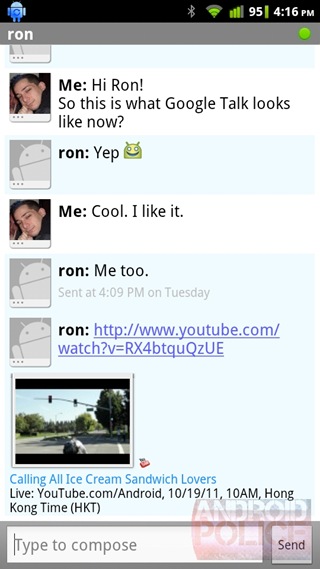 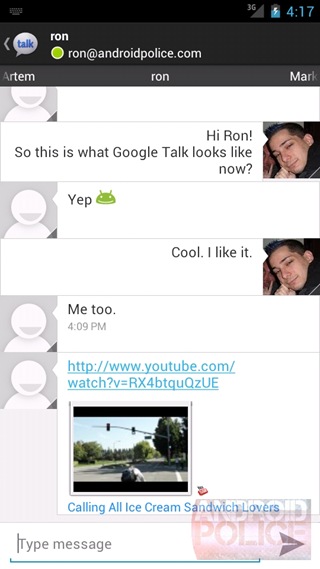 The ICS chat window gets a facelift, too. At the top there's the person's status, which in this screenshot is an email address. An email in the status means the person is on a desktop.If the person is using an Android device it will say "On Mobile Device". It does not do this on the main friends list. It should.

The pictures are bigger and have a nice alternating layout. The new "almost Helvetica" font looks really nice here, even with the emulator's crappy rendering. Nametags are totally gone, making the app more dependant on pictures (and Google+) for identification.  You get a new set of emoticons too. Nice to see an Android is still somewhere.

Youtube previews look exactly the same, and a little out of place in the new version. They need to be bigger, prettier and widescreen to fit in with the rest of the design. Somehow Google managed to program in Youtube previews but not picture previews. Though given the identical look of previews on desktop, GB and ICS, I suspect that stuff is server side. Hope for an update.

For longer messages, the old version wrapped edge-to-edge after the chat picture, the new version never fills the space under the picture. So it's the usual ICS tradeoff of less space but a prettier app. I don't think the loss is a big deal.

Not much to report in settings. They look better. In ICS the black header floats while you scroll. Settings are split up by account now, so you can have separate ringtones for each account if you'd like. Why doesn't the About section have a link to "About Talk"?

After having taken a long look at both Gmail and Google Talk, you know what word I would use to describe them? "Consistent." A word never before used to describe Android. Everything looks the same, everything works the same. If you saw the two apps in a lineup you could actually tell they were from the same OS. It's really great to see. Looking like Gmail means Google Talk actually looks good now. Another thing you don't usually say when talking about Android.

Talk 4.0 is a nice redesign, but it's a little disappointing. We're starting to see a trend in Ice Cream Sandwich of all looks and no new features. Talk is full of opportunities for upgrades - it should be Android's BBM killer. Google insists on building Talk into everything, but they never show the feature set any love. Maybe Talk 5.0 will bring the big feature upgrades.

So how do you like the new design? Do you have any questions about Talk 4.0? Hit that comment button!

[Updated x2] Security Advisory: A.I.Type Keyboard Sends All Your Keystrokes To Their Servers In ...

Fandango Movies For Tablets Hits The Market, Lets You Get The Deetz On The Latest Flicks From ...