Be sure to check out our Shadowgun Giveaway pack post, too - you could win an Galaxy Tab 8.9, a Jambox, and a $25 AMEX gift card!

My conclusion? Shadowgun takes Android gaming to the next level, and while it's not without its flaws, it sets the bar very high for the somewhat low $5 game price point. With these kinds of visuals and well-thought-out gameplay, I can't say I'm disappointed after over 4 months waiting for the game's release.

Shadowgun's visuals are most of the reason for its anticipation among Android users, and they're worth the wait. Just look at these screenshots: 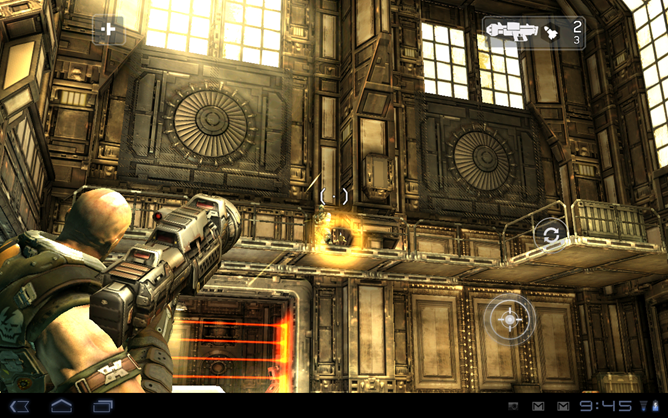 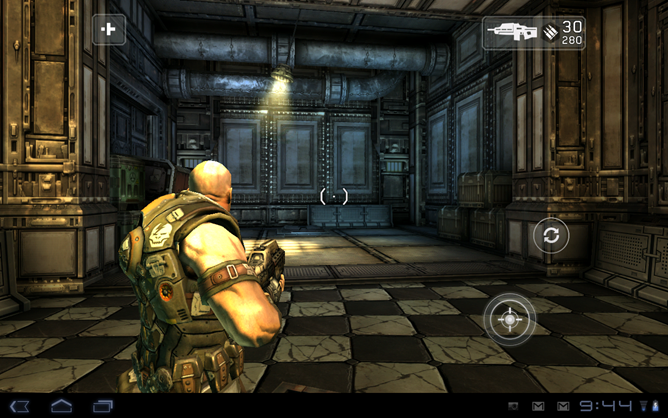 For Tegra 2 devices, the game's graphics are enhanced to allow complex shadows, lighting, and textures thanks to some NVIDIA driver magic. When the first Tegra 3 'Kal-El' quad-core devices are released, Shadowgun will take advantage of the beefier hardware to provide even better visuals. We're certainly excited about that.

Sound effects and music in the game are generally quite good, though they can sound a bit tinny, even with headphones on. However, I imagine you'd be hard-pressed to find a shooter that's any better in this regard. If you want more visuals, take a look at this video:

Shadowgun's controls are as good as, if not better than, any other shooter on Android. The control positions are laid out well, they're responsive, and I think placement is damn near perfect. But Android and tablets in general still make for a less than ideal shooter experience in this regard. So, with that, I'm going to rant a bit.

Moving your character is kind of a pain in the ass sometimes. Let me explain. The d-pad appears wherever your thumb lands on the left side of the screen and stays there until your thumb is lifted from the screen. The problem is that the d-pad it creates is just too large, the distance from the top to the bottom of the joystick is probably close to 2 inches, and that just feels unnatural - even with my relatively long thumbs. On a phone, I imagine it would be smaller, and thus easier to use. It's easy to forget, but people's thumbs don't change size depending on the device they're using, so scaling the controls up creates issues. 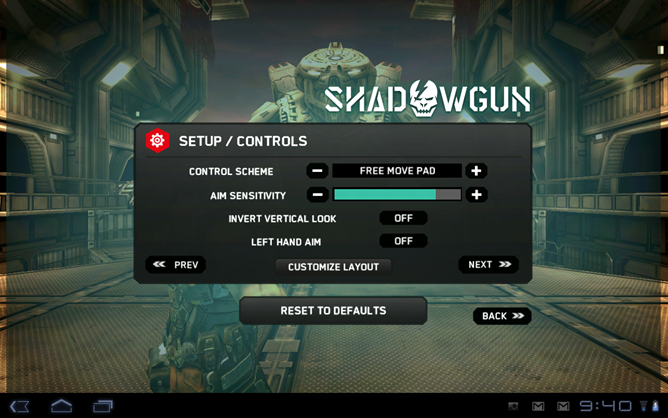 Aiming is problematic. It's definitely not as bad as Android shooters I've played from the likes of GameLoft and others, but I think there's going to be lots of room for improvement here on touchscreens. When you try to get precise with your aim, it gets jerky. This could be a limitation of touchscreen technology, but I feel like a little software "smoothing" (or a graceful aim-assist) could help this a lot. I too often found myself trying to edge the crosshairs a few pixels to the left, only to have my purpose hopelessly frustrated.

NVIDIA claims the A.I. is the most advanced for a mobile game to date. I'd say it's on par with something you'd play on a PC six or eight years ago - but that may be the cutting edge for mobile gaming. Enemies sometimes made illogical movement decisions, running to cover I was already behind. Additionally, unengaged guards are apparently blind and deaf until shot at. On the whole, though, enemies seemed to become more reactive and resilient the further I got in the game, though their actual intelligence didn't seem to improve much.

Shadowgun is a typical 3rd person shooter with a very linear layout. This makes navigating the levels quite easy, but this means it also can feel repetitive at times. Still, the amount of freedom of movement and the size of some rooms in the game makes it feel much more like a real console or PC game, instead of a gimped mobile experience. Linear as it may be, Shadowgun plays through smoothly and provided me no major frustrations - and that's saying a lot for such a complex title on a relatively young platform. So what can you expect to encounter?

Basic foot soldiers are the cornerstone of most combat encounters, while the spiders and flying robots force players to break cover, keeping gameplay engaging. The bigger, tougher enemies keep combat lively, but by the end of the game I found myself craving a bit more variety. Weapons are fairly limited as well (there's all of four that I found).

The game also includes memory puzzles, requiring you to recall the order in which keys on a number pad were pressed to access weapons chests, open doors, and discover secrets. 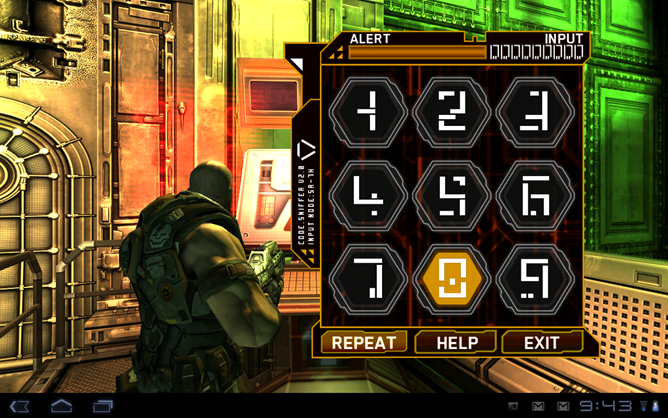 The first boss encounter is, and I don't say this lightly, a bit of a disaster. After dying 3 times to the giant lobster robot (yep, really), I thought perhaps the fight itself was not working as intended. 3 heat-seeking missiles, about 10 seconds into the engagement, rained down and killed me. They could not be outrun or shot down. The only cover available was a few 3-foot high riot barriers - all facing parallel to the boss - which communicated to me "these are useless." So I tried one of the barriers. Lo and behold, the missiles glided over my head and exploded safely behind me. I then waited for the boss's "weak spot" to appear every 15 seconds or so, and made it through the encounter suffering no damage whatsoever. It is the game's first such fight, but the simplicity of it is almost embarrassing.

One other annoyance about the boss fight was the "checkpoint" which it spawned me at after death. Namely, about 5-7 enemies before the beginning of the boss encounter, meaning I had to re-kill a whole 2 minutes worth of bad guys to get back to the mega-lobster fight. 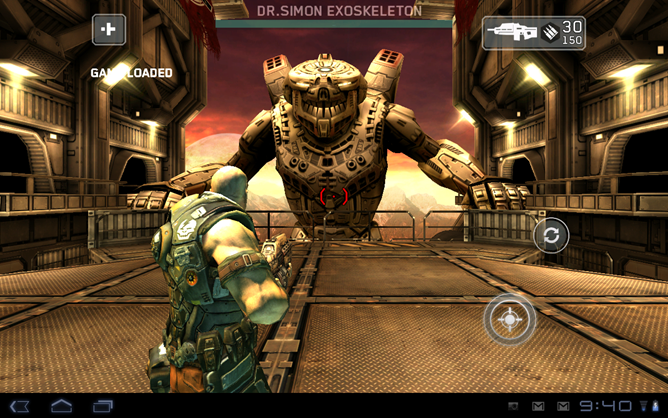 Other bosses in the game provided little challenge - the only difficult boss is the last one, which I found myself unable to defeat on normal difficulty. But honestly, I wasn't exactly chomping at the bit to see how the story ended. Speaking of which...

Madfinger claims to have enlisted the help of a professional video game story writer and voice actor for Shadowgun. The latter investment is apparent - the former, not so much. I found the story to be completely ineffective at motivating me to move onward in the game, and the few painfully corny jokes dropped in for comic relief from time to time didn't exactly help.

That said, Shadowgun really isn't about the story. So in all honesty, even though the story is subpar at best, it doesn't make me think much less of the game as a whole.

If you've got $5 to spend and you're looking for a fun new shooter for your Tegra 2 Android tablet or phone, there aren't many better ways to spend it. Madfinger has upped the ante for visuals on mobile gaming, so here's to hoping they bring some much-needed competition to the growing market for high-end Android games.

You can get Shadowgun on the Android Market now. Also, check out our awesome Shadowgun Giveaway, here.