Update: This post has been updated with links to a deeper look at each feature. Enjoy!

Holy crap. The Samsung/Google event ended just a little while ago, and I have to say, I'm pretty overwhelmed by the amount of awesome that I just experienced. The Galaxy Nexus is official, as is its counterpart OS: Ice Cream Sandwich. There is no doubt that ICS is the most polished version of Android to date. It's elegant, clean, and just downright gorgeous. Let's take a look at all the new features together, shall we?

One thing that Google is definitely proud of in ICS is the new typeface, known as Roboto. It was designed specifically for use in ICS from the ground up, and brings clean lines, smooth curves, and, above all, ultimate readability on the small screen. It definitely looks great on another of the new features in 4.0... 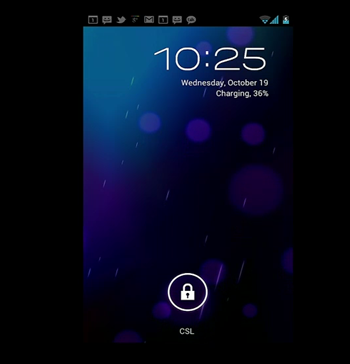 The new lockscreen is a lot like the one from Honeycomb, but has clearly been optimized, as it offers shortcuts to both phone and camera. Did I mention the font? Yeah, that's Roboto. So clean.

Gone are the days of capacitive and physical buttons to navigate between apps and through menus, as ICS uses full touchscreen controls. But you already knew that, didn't you? 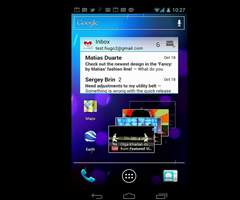 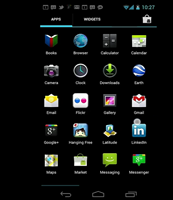 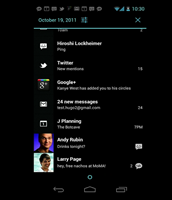 Some of the stock widgets have received a makeover, but we've already seen that. They are now also resizable, and arranging homescreens is significantly easier since items can "bump" each other out of the way. All widgets are now accessible directly from the app tray, creating a much more intuitive experience.

Speaking of intuitive, how about native drag-and-drop folder support? Ice Cream Sandwich has it, so organizing apps on the homescreen will be a snap. Favorites and recent apps have also taken a page out of the Honeycomb playbook, and they look damn good on a phone. Very clean.

Once in the recent apps screen, killing a running app is easy: just flick it away. Really, that's it.

Native screenshots is something that Android has needed since day one, and now it's finally available. To grab a quick screencap, simply hit Volume Down + Power. After a nifty polaroid-style animation, your shot is automatically saved. Easy peasy.

Much like recent apps, you will also be able to swipe-to-clear notifications. If you're a CM7 user, this is a feature you should already be very familiar with, and, quite frankly, one that you probably rely on. I know I do.

They keyboard has also spent some time in the lab receiving better prediction, accuracy, and responsiveness. It now includes an inline spell checker that allows you to choose between several similar words.

If you've been aching to be able to work a little hack-and-slash on your messages before you send them, then you'll be happy to know that words are now draggable. Simply highlight the word and drag it to the desired location. Mad easy.

Of course, if you prefer to speak instead of type, you're going to love the enhanced speech-to-text engine: it's instant. No more talk-then-wait; you speak and it starts typing almost instantly. Need to think for a second? No worries, it waits on you. Take that, Siri. 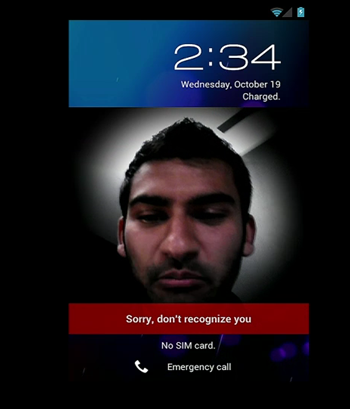 So this one didn't fare so well in the presentation, but we still got the idea: instead of using a pin or pattern lock, you can unlock the phone with your own ugly mug. Unless, of course, your mug isn't ugly at all. Then you'll unlock it with your beautiful, ray-of-sunshine face. Just hit the button, the front facing camera will initiate and, once it recognizes you, the device will unlock. How cool is that? 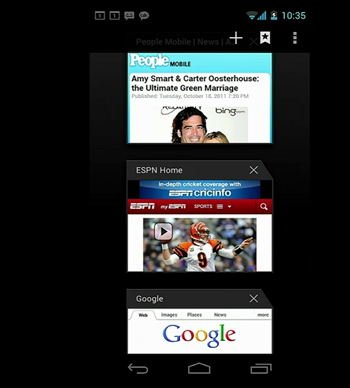 The browser is one area that I can honestly say is a bit of a letdown, but only because it's not Chrome. Even with that in mind, it does offer features that have attracted users to third-party browsers for a while, like bookmark sync (with Chrome in this case) and... wait for it... user agent switching! Finally! You can force the browser to load the desktop version of any site. Awesome.

Once you're finished with any open tab, it's easy to shut 'em down quick: just give it a simple flick. Are you starting to notice the pattern? Flicks kill unwanted stuff. Also, if you don't want to leave any trace of that closed tab, the new browser also offers incognito mode, another feature that CM7 has had for a while.

Moving the opposite direction, you'll also be able to save pages for offline viewing. Think Read it Later, only native. 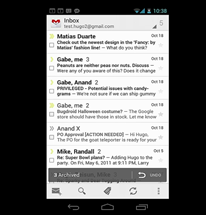 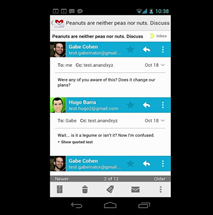 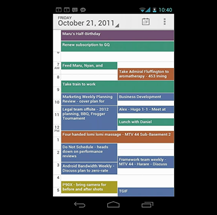 Taking advantage of the increased screen real estate on the Galaxy Nexus (which uses the native resolution for ICS), Gmail now displays two-line e-mail previews so you can get an idea of what the message is all about without actually opening it. Once it is opened, though, simply swipe left and right to change messages. You can swipe almost everything in ICS. Almost.

The Calendar app is now more useful than ever, too. Thanks to the awesome new font we talked about earlier, everything is sharper, more crisp, and easier to read. Not only that, but if you're ultra-busy, you can pinch-to-zoom the calendar to get a closer look at what the agenda holds for that day. 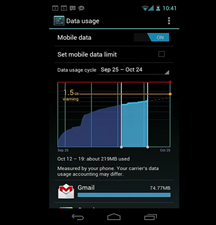 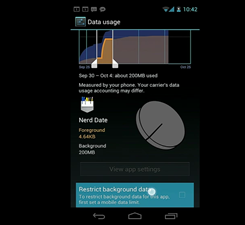 Here's a good one for everyone who will hop over to Big Red just to grab the Galaxy Nexus: a native way to monitor which apps are whoring all of your data. I mean, the last thing you want to do is go over your allotted bandwidth because some app wants to pocket all of your geebees for itself, right? You can easily keep an eye on specific apps, and even monitor them by specific timeframe. Getting close to filling your 2GB limit? No worries, the Data Usage app can automatically warn you and/or kill your data connection once you reach a certain amount of usage -- if you want it to, that is. It's thoughtful like that. 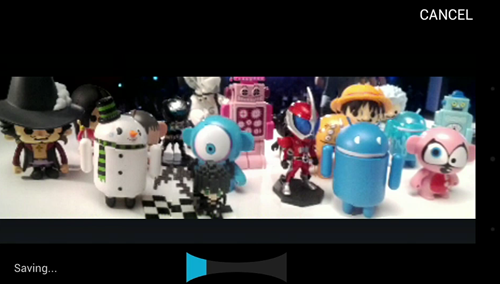 Out of all the new features in ICS, this one is probably my favorite. The new camera has some amazing new features, such as touch-to-focus, face detection, zero-shutter lag (!), and panoramic mode. It doesn't stop there, either, as the video recording functionality has also been injected with steroids. It offers some super-cool features, like time lapse and the ability to take a picture while recording a video. I can only begin to imagine the possibilities for that.

Also included in the update camera is another feature that we've already looked at: photo editing. Don't expect to do some major shop jobs to your images, but for the basic touchups or simple filters, these feature set should have you covered. 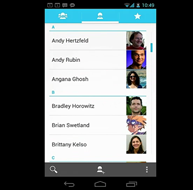 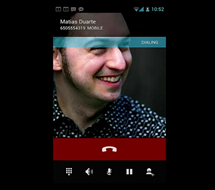 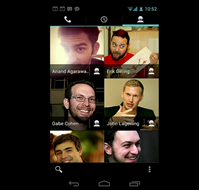 The Contacts app not only received a new look, but a new name as well. It's simple. It's effective. It's People. It's intuitive, elegant, and pretty. What more do you want out of an app like this? Everything is centralized, so you can find every last bit of information on any given contact in one central location. Slightly creepy, actually.

People, of course, ultimately ties into the new dialer, or Phone as us old-timers like to call it. Much like everything else in ICS, it's clean and swipe-able. The favorites page is nothing more than big blocks of contact pictures now, which is cool... as long as your contacts actually have pictures (I'm lookin' at those of you who don't have a Facebook. Go make one. I'm sick of seeing the default icon as your picture).

You can also manipulate your voicemail directly from the device now, too. Play it, fast forward it, delete it --- all from the Phone interface. This almost gives me a reason to actually check my voicemail. Almost. 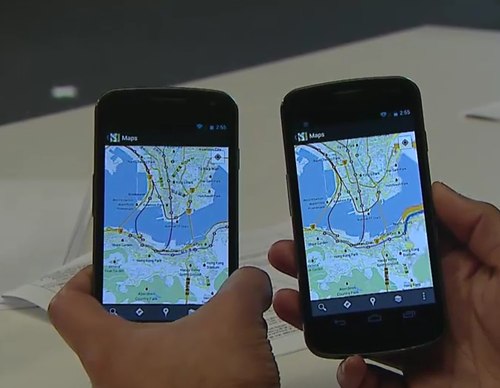 This feature is proof that NFC is good for more than just paying for stuff. It allows you to share pictures, apps, links, maps... and pretty much everything else with a simple bump of the phone. Seriously, that's it. Both phones must have NFC, of course, but that probably goes with saying.

While this feature wasn't announced at last night's event, it could potentially be a game changer for those who frequently transfer data between devices. Instead of relying  on a USB cable, cloud storage, or emailing files to yourself, you can use Wi-Fi Direct to setup an exclusive ad-hoc network between devices specifically for transferring files back and forth. It's similar to Android Beam without the NFC.

It's inevitable that we missed something -- don't worry, though, as time goes on we will uncover new and useful features... just as soon as we get the GN in our hands, that is. In the meantime, give us your thoughts on ICS, the Galaxy Nexus, and anything else (relevant) that you feel like dropping the opinion bomb about.

Samsung's Mobile President: The Galaxy Nexus Was Designed With Patents In Mind