One of Android's new features that was stressed pretty heavily on stage tonight was Roboto, a system font created specifically for Ice Cream Sandwich, which, in all honesty, looks a lot better than the system fonts we've seen before.

At first I questioned why it was necessary to spend so much time discussing a simple type face (one without even a hint of a serif), but when I thought about it, it made sense - most of the things we do on Android devices involve letters and numbers in some way, and why not make those characters aesthetically pleasing? It's a relatively small touch that goes a long way in terms of user experience. 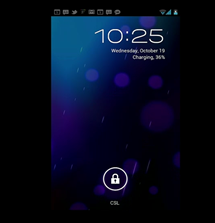 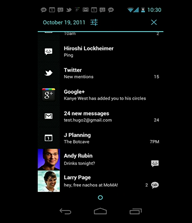 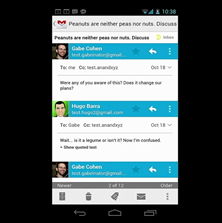 As I mentioned, Roboto is a sans-serif font, keeping things simple and smooth.  Its characters have a pleasing roundness, and are spaced rather nicely, making e-mails, clocks, and menus easy on the eyes, and, in the words of one presenter, "a pleasure to read."

Again, Roboto may be a small touch, but it's just one of the numerous new additions to Android that make Ice Cream Sandwich the the best mobile OS Google has yet cooked up.

ICS Has Completely Revamped Your Contacts Into The "People" app