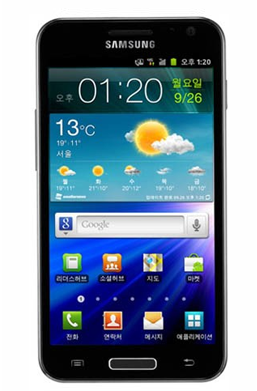 We originally saw this phone announced last month in Korea, where Samsung wowed with a spacious 4.65" screen, 1280 x 720 resolution, and disappointingly restricted geographical range. Still, if you're itching for a phone with specs to compete with the upcoming Nexus, plus TouchWiz on Gingerbread, this filing could be the good news you were hoping for.

While it didn't make it into the name, NFC is to be featured, along with a 1.5 GHz dual-core processor. The processor is as yet unspecified, although we did find one Japanese blog that states that it will use the same Qualcomm 8X60 as the T-Mobile GS2 we reviewed earlier this week.

Unsurprisingly, Samsung has requested a "short-term" withholding of photos of the device, a 180 day period which will surely continue well after we hear further details about this device's American intentions.

[Exclusive] Here Is What The Gmail, Email, And Calendar Ice Cream Sandwich Widgets Look Like