A fresh version of Google Translate hit the Market today. Conversation mode (direct speech to speech translation) now works in 14 languages: Brazilian Portuguese, Czech, Dutch, French, German, Italian, Japanese, Korean, Mandarin Chinese, Polish, Russian and Turkish.  Also new is a personal dictionary, the ability to correct voice input before having it translated, and pinch zoom support for getting a close up of the translated text (Chinese symbols can get surprisingly complicated).

Update: Google's finally got with the program and made an official blog post.

Google has helpfully provided a video:

Notice anything about the voice in the video? It's not the usual scary robot voice. Google has switched to a cloud based text to speech system - it doesn't use Android's built in TTS at all. I wonder if Google will eventually dump from client side TTS entirely, because this sounds way better. 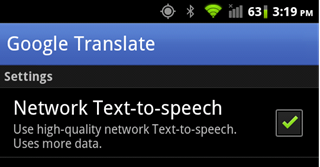 Even if you have no use for translation, try out the app. It's worth it for that "holy crap, I'm living in the future" feeling. [Update: Now With Video!] Ice Cream Sandwich Statue Shows Up At The Googleplex