Online game rental service Gamefly pushed an update to its official app today which brings the same social experience to Android phones and tablets that iOS users have had since April of this year. The service allows you to create a profile and connect with other users for online gameplay (through XBox Live, PSN, or WII), follow other gamers to find out what they're playing, comment on others' posts, share content, and seamlessly integrate with Twitter or Facebook. 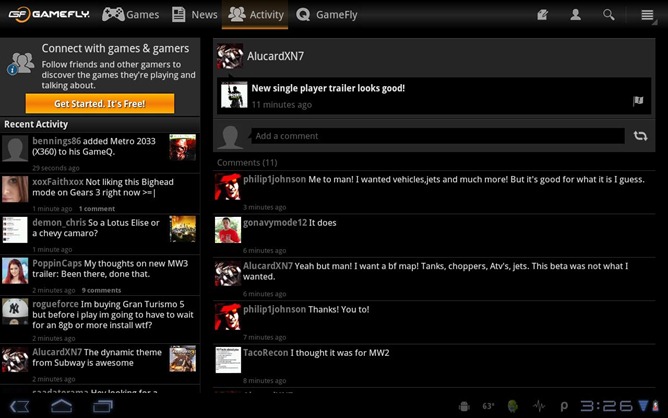 The update is available now in the Android Market, you can grab it by hitting the widget below. The GameFly App is A Leading App for Video Games News and Information, With Over 4.5 Million Installs

LOS ANGELES, CA, OCTOBER 13, 2011 – GameFly, Inc., the leading online video game rental subscription service, today unleashed its popular social network for gamers via updates to its GameFly App for Android phone and tablet users. The new social component has been successful on the iPhone since its April 2011 launch, and now all like-minded gamers can connect with each other across platforms. The GameFly App, the leader in video games news and information with over 4.5 million downloads, is a comprehensive resource for gamers that features easy-to-use and free discovery tools for new games. The updated App, available now in the Android Market for Android phones and tablets, includes the following:

“We’re very proud that our mobile App appeals to all gamers, not just GameFly members, giving them top quality news and information, and a very interactive social experience,” said Sean Spector, GameFly co-founder and SVP of Business Development and Content. “With an average in-App session lasting more than an hour, the new social features are a great resource for casual or avid gamers to learn about what’s hot or not, and to meet new people to game with.”

Rockstar Games Wants You To Steal Cars And Shoot People From Your Mobile, Is Porting Grand ...