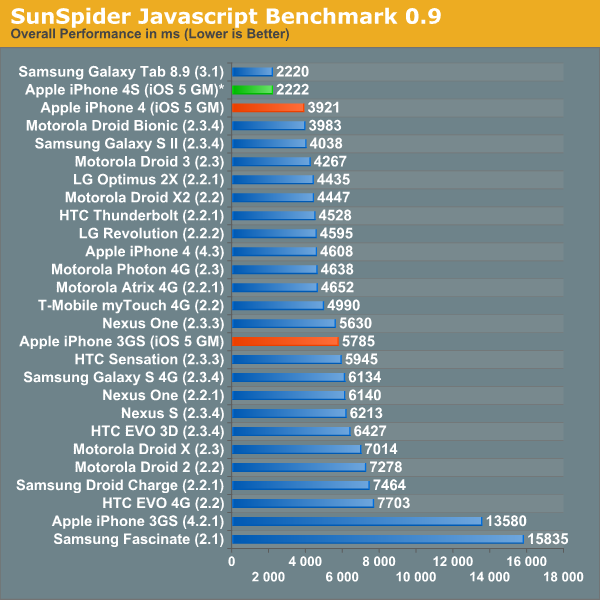 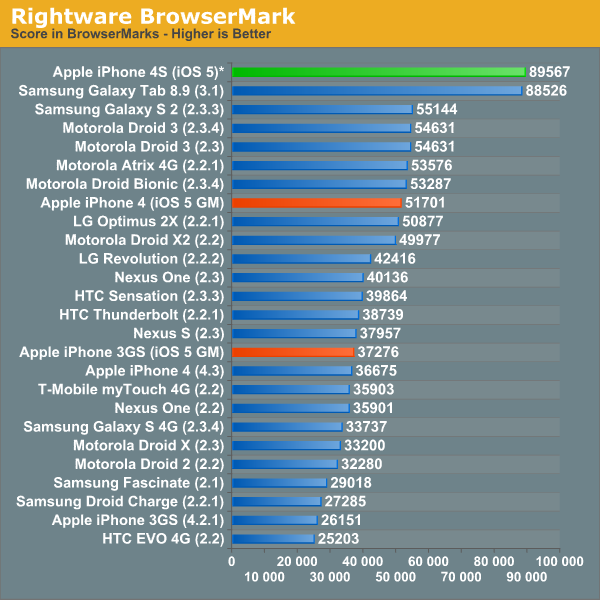 The closest competitor to Apple's iPhone 4S? The testers decided to make the Galaxy Tab 8.9 the Android Honeycomb representative, and even with its aging Tegra 2 chipset the Tab pretty much matched Apple's iPhone 4S inch for inch. But we think we have an explanation for the Tab 8.9's extreme browser performance figures: Honeycomb. Honeycomb's hardware-accelerated browser, which will be making it into Ice Cream Sandwich more likely than not, turbocharges browsing in Android. There's a reason so many people use 3rd party browsers on Android phones and some manufacturers (eg, HTC) even include their own hardware-accelerated browsing software: Android's stock browser (pre-Honeycomb) kind of sucks.

The next closest competitors are all a far cry from the "Top 2" on the list. My suspicion is that the next Nexus phone will probably decimate these figures, as will the Galaxy S II when it receives an update to Ice Cream Sandwich, when the browser will truly be able to utilize all the computing power the phone possesses. If there's one thing Google does well, it's JavaScript performance.

Apple's browser in iOS 5 would also appear to be heavily optimized for the 4S's dual-core processor, practically doubling the browsing performance compared to an original iPhone 4 running the same version of iOS.

Next, we have some GPU performance tests. These, in contrast to browser benchmarks, are less attributable to software optimization. 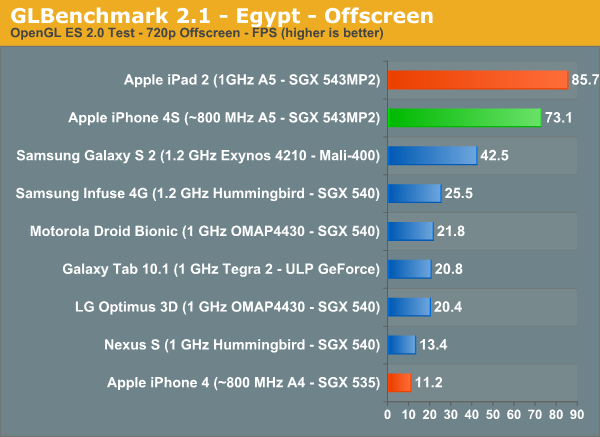 While Apple has had a love affair with the OpenGL platform for years, it also has remained the favored son of the open source movement for hardware accelerated 3D for an equal period, if not longer. This kind of test is a lot more "software-agnostic" than the browser tests above. But the difference in performance here is simply staggering. The iPhone 4S rendered the test at an astonishing 73.1FPS - nearly double (~175%) the figure put up by its closest competitor, the Galaxy S II, at 42.5FPS. As a control, a Honeycomb tablet (the Galaxy Tab 10.1) was thrown into the mix, and neither Honeycomb nor Tegra 2 (a fairly old chipset, admittedly) could provide much of a challenge to Apple's A5 processor equipped with the SGX 543MP2 GPU.

Is this another case of Apple's ability to optimize performance with its closed hardware ecosystem? To some extent, yes, of course. But look at the original iPhone 4 running iOS 5 - it's clear that the 4S's beefed-up internals are truly making the difference. While we have yet to see how the upcoming Nexus Prime / Galaxy Nexus / whatever you want to call it benchmarks on a similar test, it seems likely that the phone will share an Exynos processor and Mali 400 GPU with its close cousin, the Galaxy S II. Ice Cream Sandwich may improve performance in an OpenGL benchmark like this to some limited extent, but even we have our doubts about the next Nexus being able to top the 4S's impressive figures in this arena.

It's also rather sad to see devices like the DROID BIONIC, released only a month ago, having their scores nearly quadrupled by Apple's latest phone. While we can assuredly expect even more powerful Android devices (possibly with quad-core processors) by next Spring, even I'm surprised at just how huge a difference Apple's "incremental" hardware upgrade has made in terms of 3D performance.

And, in the end, while benchmarks are just that, let's face it: everyone likes to win.

Amex Customers Can Now Have All Their Banking Needs Taken Care Of With The American Express App ...