Bringing probably one of the most useful changes to the web Android Market since its reveal, Google just rolled out an update to how user reviews can be sorted. But first, a little bit of history. When the Market was released, all reviews were sorted in a natural reverse chronological order.

At some point later, Google changed the sort to float most helpful reviews to the top (whatever that algorithm may be), which infuriated many as now old and oftentimes irrelevant reviews showed up above newer, more useful ones.

Today, we, the users, can finally sort reviews any way we see fit: 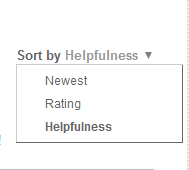 Now if we could only filter by version number... can we have that next, Google? Pretty please? Oh yeah, and any chance of the same in the device Market?