From developer DWP, DW Contacts & Phone & Dialer (hereafter referred to as DW Contacts) makes our fifth entry in the hunt for the best dialer, combining a slew of features into one versatile (if a little clumsy) interface.

The first thing I notice about most apps is their visual design. DW Contacts was no different in this regard, but that isn't necessarily a good thing. DW doesn't offer anything really new in the design department, except for the ability to change the colors, transparency, and font size of pretty much any element of the app. This is nice, but nowhere near as flexible as the theming we've seen with certain other dialers.

Besides that, DW Contacts has a lot of features. It has all of the things we've come to expect, plus a few surprising options that were not only unexpected, but impressive as well.

My main issues with DW are its rather rigid design, the somewhat chaotic means of navigating all its various options, and the handful of redundancies it contains. All of that being said, DW is definitely a functional, useful dialer replacement, and has a lot to offer.

DW has a nice set of features, and the list is quite hefty. We'll start by just going over its basic tabs, then expand to the options found in its toolbox.

First up is the dialer screen. This is fairly standard - a number pad with a call log underneath, which, when swiped, expands to a full call log. There is an intuitive search option, using both numbers and letters to quickly search contacts. Within the settings dialogue, the user can set quick dial options, allowing dialing at the press of a single number. 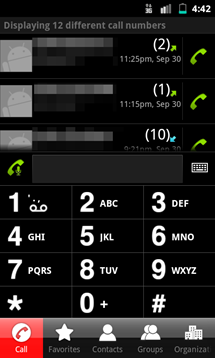 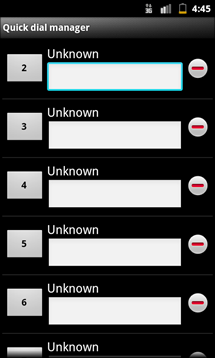 Next up is the Favorites tab. This is exactly what it sounds like: a tab that displays contacts that you've marked as favorites, as well as those that you "frequently contact." Clicking on a contact's name anywhere in the app opens up the contact page for that person. Oddly, DW opens Android's stock contact pages, which kind of disrupts the cohesiveness of the interface, but is just a minor issue. 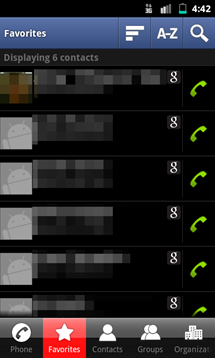 The Contacts tab is where things start to make a little less sense. For the most part, it's your average contacts list. It includes the handy option to sort contacts by a variety of criteria, or to jump to a specific letter. What's odd is that the specific letter function has a dedicated button, which is limited to 10 uses in DW's free version. This limitation makes no sense, however, because if you begin scrolling and grab onto the large scroll bar, it will allow you to scroll by letters alphabetically, essentially serving the same purpose. 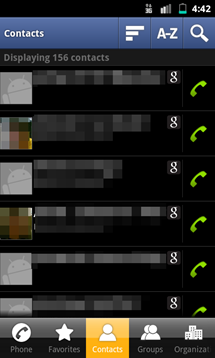 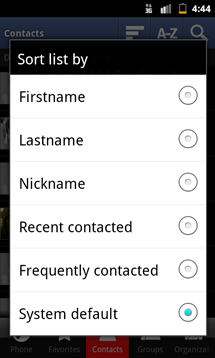 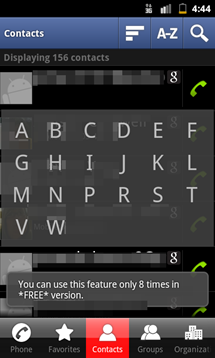 The Groups, Organizations, and Titles tabs are all very standard, listing contacts according to their respective categories. Something interesting within these is the ability to create subgroups within each group. A tab that comes in a little more handy, however, is Events. This tab shows all contact-related events, including your contacts' birthdays, and DW can be set to notify you of these events. 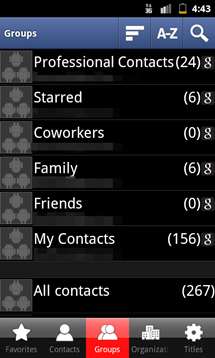 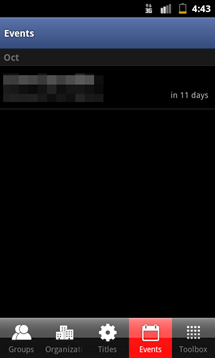 Finally, we have the toolbox. This tab is mostly a re-hash of the previous tabs, but throws in several additional features, the first of which being 'SMS.' This feature allows you to see your previous mass SMS messages sent to groups of contacts.  When the user is viewing any category of contacts, including favorites, groups, organizations, and titles, the app allows for multiple selections and the mass e-mailing and text messaging of selected contacts. This is a very impressive (and useful) feature for business users, or those who need to communicate an idea quickly and effectively to a group of people.

Even more impressive is the fact that DW will automatically parse in each contact's name. For example, if you typed a message into DW reading "Hey ???, don't forget to upload your assignments by this Sunday," and sent the message to Mary and John, Mary would see "Hey Mary..." and John, likewise, would see his name. 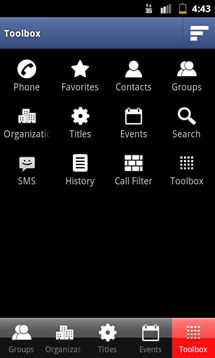 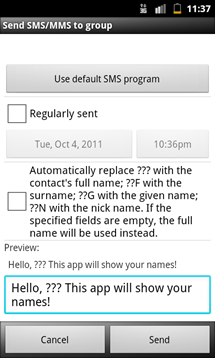 Next in the toolbox is the History button, which opens up a much more full and detailed call log, sorting your interactions by date and contact. Really I think this could have been lumped in with the call log at the dial screen, but it's a minor redundancy.

Finally we have the call filter, which isn't necessarily what you'd expect. This feature actually intercepts entire groups of contacts, and can be set to intercept calls only at specified times and week days. Ostensibly this is to keep the user from making (or accepting) any unwise phone calls after over-indulging (read: no drunk dialing), but I could imagine it having other uses as well -- for example, to prevent calls during dinner or late at night. 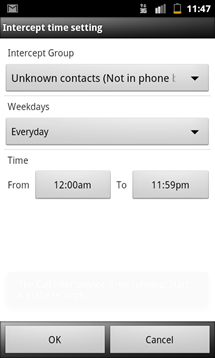 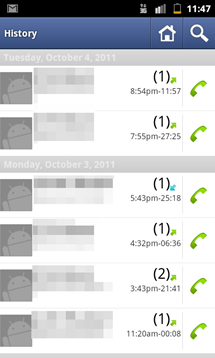 One last feature of DW that's worth mentioning is the ability to create shortcuts on the home screen to contacts, groups, or simply the dialer. Personally I am fine with replacing the stock dialer icon on my dock and letting that be that, but it's nice to know the option is there.

DW Contacts certainly has a lot to offer. It has all of the features I could imagine a dialer to include, but its implementation could use a lot of work. The rather unappealing interface, coupled with redundancies and confusing means of accessing features are serious hits against the app when there are many other options that are, well, prettier.

Despite the few minor complaints I have about this dialer, the fact is that it's extremely versatile, functional, and provides a ton of options in its free iteration. These things alone make it a powerful, useable dialer replacement, and justifies giving it a go for at least a few days, if not longer. 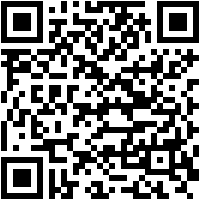