Prev
Posts in the last
24 Hours
sorted by
Hottest
Next
Update: It looks like someone has way too much time on their hands. As reader benjymous pointed out in the comments, the second image is clearly ripped directly from a demo java app from the BBM SDK, giving us solid reason to believe that this is indeed fake. Boo!

As an ardent Android fan I spent the better part of the last few months trying to convince my girlfriend to switch over to the green robot after she lost her beloved BlackBerry and required a replacement phone. However, nothing I said would convince her to give up the corporate mainstay, I even suggested that an iPhone (*gasp*) was a superior device to the BlackBerry. It turned out that the only reason she wanted a BlackBerry was because of its built-in Messaging service: BBM (BlackBerry Messenger). Hence, it seems that the only reason BlackBerry still retains some of its market share is because of this incredibly popular IM client. Although there are numerous free alternative IM clients, such as Facebook Messenger, WhatsApp, and the soon to be launched Apple iMessage and Samsung ChatON, BBM appears to have a very prominent and loyal fan-base despite being limited to only BlackBerry devices.

This could all change if BBM suddenly became platform agnostic and was available to all smartphone users. Although rumored in the past, TechRadar has obtained what appears to be concrete evidence, in the form of a couple of leaked blurrycam photos, that BBM is indeed coming to Android in the near future.

The first photo shows the BBM icon on the Android app screen. This is hardly proof of anything, especially since the quality of the icon is not very high. 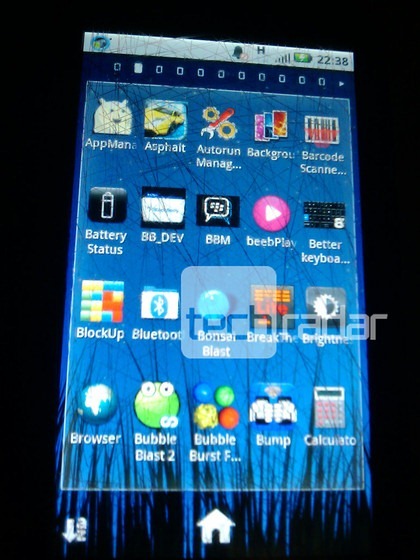 The second screenshot adds a little more meat to the matter as it shows the potential BBM contact profile page. 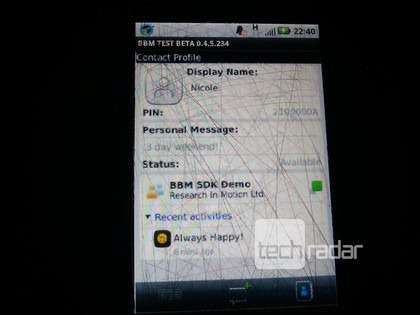 What's the deal with the ridiculous amount of scratches on this screen?

At this point naysayers could very well argue that these are fakes and judging by the poor quality of the pictures I would tend to agree. However, BBM for Android rumors have been circulating for some time now and with RIM's declining market share this could be exactly the boost they need. Still it is rather surprising that RIM would be willing to share this exclusive service with other platforms considering it is the only reason people are still buying BlackBerries.

According to TechRadar's inside man, the BBM app for Android is in the final stages of testing and will support Android's push notification service.

Zimperium Finally Releases 'Anti' For Android, Allows You To Use Penetration Testing Tools On The Go