One of my favorite features of Android is being able to have widgets on my device. With just a few widgets, my important information can be a quick glance away. Unfortunately, widgets typically offer a limited set of information (e.g., the last five messages) and the lack of animation on the majority of widgets makes them feel more static than they really are. Even Honeycomb's widgets are fairly limited. Fortunately, Android's live wallpapers allow for a far more engaging experience and the Bubbleator live wallpaper takes advantage of that.

Full disclosure: Bubbleator is made by ARO, and I have recently been hired on as a developer at ARO. I have been developing the Deals Add-on described later in this post. Although I definitely think Bubbleator is a great product, it is only fair that I disclose my affiliation up front.

To describe it briefly, Bubbleator is a live wallpaper that has bubbles floating from right to left. Each bubble is a nugget of information such as the current weather or a missed call. You can fling the bubbles away (similar to flinging a card away in WebOS) if you do not care about them, and you can tap on them to bring up an interstitial that will give you more information. The current version of Bubbleator in the Android Market features Twitter, Facebook, weather, SMS, missed calls, and calendar events. It is a neat way to explore a variety of content visually without having to open any specific app. 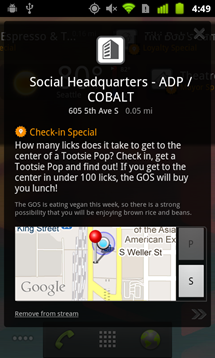 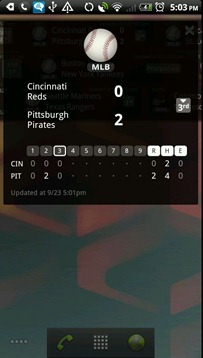 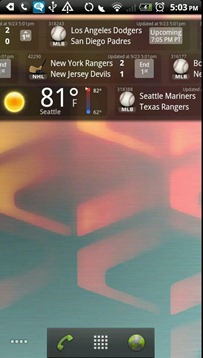 This week, a new version of Bubbleator will be coming out that improves efficiency and battery life. It will also allow for add-ons developed both by ARO and by others. Andy Hickl, President of ARO, says that three add-ons will be available for Bubbleator very soon.

The nice thing about these being add-on APKs is that you can just download and enable the ones that you want. If you do not care about stocks, do not download that add-on. If you only care about the NFL, then download the sports add-on and just select NFL (or the specific teams you are interested in).

The only negative thing that I can say about Bubbleator is that if your wallpaper is already covered by icons, it can be hard to clear out the room for it. You will ideally want two rows free across all your screens, but you can cover it with icons like any wallpaper (though they will be less legible). That said, it is one of those apps you will want to show to your friends. Most live wallpapers are purely visual, so it is great to see how they can be utilized for productivity as well.

Bubbleator runs on any device that supports Live Wallpapers except for devices running TouchWiz 4.0 or HTC Sense 3.0. Andy Hickl says that a version compatible with those is coming later this fall.

[Weekend Poll] Will the Amazon Kindle Fire Light Up The Tablet World?

Zimperium Finally Releases 'Anti' For Android, Allows You To Use Penetration Testing Tools On The Go