Before giving Logitech's Keyboard Case a go, I was skeptical about how useful a separate keyboard would be for my Galaxy Tab 10.1. My main concern about keyboards in general was portability - I picked up the Galaxy Tab 10.1 because of its slim design, easy portability, and Android functionality, so carrying around a bulky accessory was out of the question, as it seemed to defeat the purpose.

Logitech and Zagg have created perhaps the most elegant solution to this problem that I've seen yet with the Keyboard Case. It's not only a capable, useful keyboard, but also functions as a case, integrating nicely with the portability of the Tab itself.

The Keyboard Case has an aluminum outer body, giving it a sturdy, weighty appearance. Looks can be deceiving however - the keyboard is surprisingly lightweight, likely because the majority of its construction consists of plastic. The slot that cradles the Tab seems shockingly secure, and keeps your tablet stable. I feel confident during use that the tablet is safe, and will not move around if I strike the keys too hard (even when the Tab is in portrait orientation). This is something I can't say about Samsung's official keyboard accessory, which allows the tablet to wiggle a bit during use. The lack of a port connection and presence of an independent (and impressive) battery are very strong positives in my book, as it means I don't have to worry about draining my Tab's battery simply because I want a more convenient typing experience.

Logitech's keyboard pairs with the Tab quickly and easily via bluetooth (meaning you don't have to plug in), and overall is very easy to use. That isn't to say it comes without its own set of drawbacks, however. While Logitech's Keyboard Case performs well and seems sturdy, it's missing a few small touches that really would have put the keyboard above and beyond its competitors in my opinion.

The first thing I noticed about the actual keyboard itself was that it is flat. The bottom of the case lies flush with whatever surface it is sitting on, and this gave me some initial reservations about how comfortable I could expect my typing experience to be. I was pleasantly surprised, however, to find that typing was a breeze, and that the keys are situated in such a way that my fingers arch over the border of the keyboard to the keys with ease. 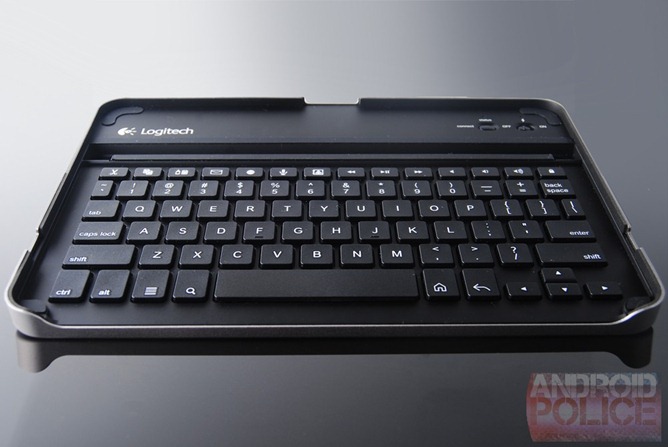 The next thing I noticed was the array of shortcut keys along the top row of the keyboard. These shortcuts include cut, copy, paste, email (not Gmail), browser, voice search, contacts, and a series of media buttons followed by a lock button which has the ability to both turn off and on your tablet's display. Otherwise the shortcut options are quite sparse, offering the basic search, menu, home, and back options common to many Android phones and indeed the Honeycomb taskbar. There are certain keystroke combinations that work as shortcuts, but a list of these is nowhere to be found, either in the keyboard's documentation or on Logitech's website. After a couple of hours pressing every key combo I could think of, I came up with a few interesting shortcuts, but not exactly the ones I was looking for.

For instance, Samsung's official keyboard dock has a dedicated button to open Honeycomb's notification area. Not only does the Logitech keyboard lack this, but I was unable to find a keystroke combination that would even get me close. There is however the option to immediately pull up the Touchwiz task manager, or add a widget to your home screen. 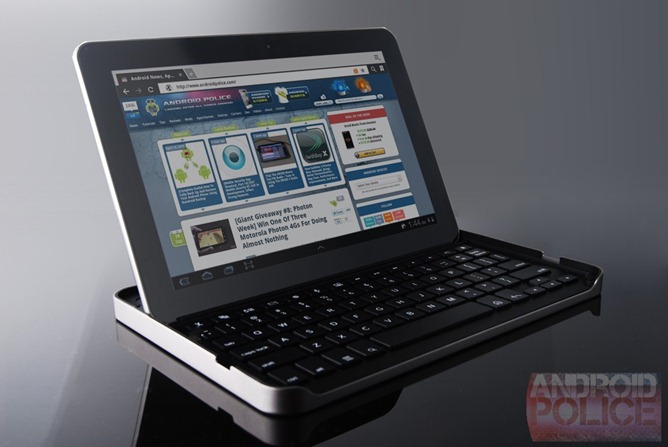 Of course the real meat of any keyboard's functionality is, well, typing. Being a couple inches smaller than a standard keyboard, the Logitech Keyboard Case feels a bit cramped, but the keys are spaced evenly, and overall I felt my fingers had plenty of room to find the keys quickly and accurately.

The keys feel a bit light and plastic, which of course is because they are light and plastic. The issue here, however, is that they have the ability to wiggle back and forth a bit, instead of being secure and simply moving up and down when pressed. This is a small design complaint but is another touch that could have really enhanced the keyboard. 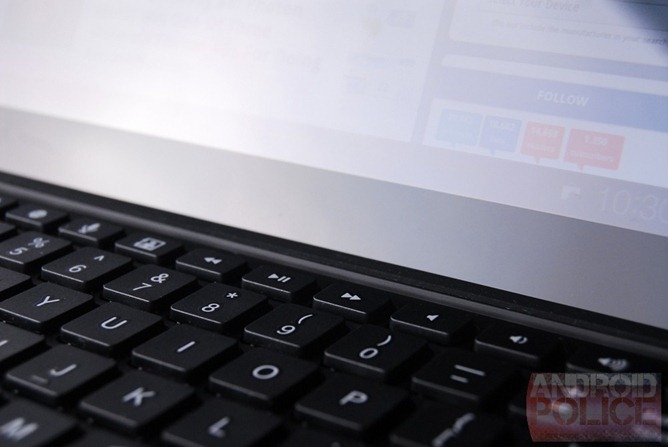 All the typical keys are present, except the "delete" button, which is only a minor inconvenience for those wishing to delete instead of backspace. It's also important to note that the caps lock key has no indicator light. In fact, there is no way of knowing whether it is activated or not -- until you start typing, of course.

Written in the "impressive" column is the fact that the keyboard can be used to play many games on the Tab 10.1. While not perfectly responsive, I was surprised to find that I could play games such as Evac HD using the keyboard without issue.

Overall, I would say that the Keyboard Case provides a pleasant typing experience for such a portable, lightweight device, and does almost everything I want it to, while certainly doing everything I need it to do.

This is where Logitech and Zagg came together to make a truly impressive product, and one of the reasons I was eager to check out the Keyboard Case to begin with, having dismissed most keyboard accessories out of hand.

The fact that the Galaxy Tab 10.1 actually fits into the Keyboard Case is brilliant. It's the perfect solution in balancing the convenience and functionality of a keyboard with the portability of the Tab itself. 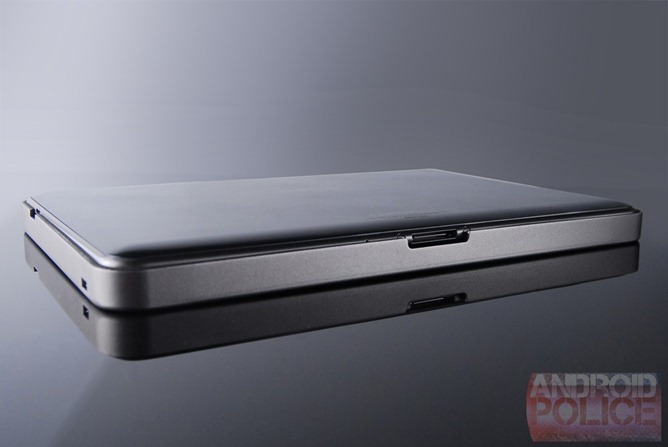 As stated earlier, the Keyboard Case's exoskeleton is made of "aircraft grade aluminum," meaning it is not only sturdy, but visually appealing as well.

One area of concern I had with the case functionality was whether the Tab would fit well, and - more importantly - whether it would be secure. The answer to both of those questions is yes. Zagg has found an interesting balance in designing the Keyboard Case. The Tab takes active effort to fit into the case, but it isn't too hard to manage. That being said, once the Tab is situated, it will stay that way until you forcibly pry it out using the negative space in the front of the aluminum frame.

While cased, the Tab's ports are still accessible. The charging port, earphone jack, and both speakers are readily accessible and visible. Leaving the speakers exposed is a nice touch, in case you want to start some music and put the Tab into its case configuration. Also notable on the Keyboard Case is the charging port, which is your standard miniUSB port. A cord is included, but it is quite short, meaning you'll need to be very close to a computer in order to charge. 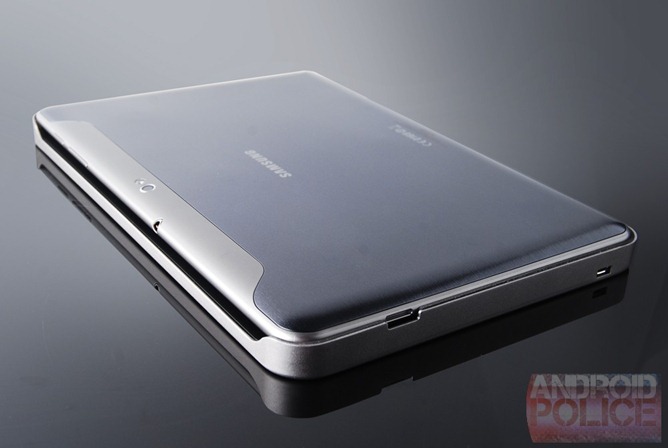 The good news is that charging is relatively quick. The Keyboard Case's documentation claims a battery life of "several weeks with normal use," a claim which I was admittedly hesitant to accept. After a full charge and - what I would consider - heavy daily use for over a week (most of this review was written using the keyboard), the battery has shown no signs of slowing down. Of course it's hard to really get a grasp on where the battery level is, since the indicator light only comes on at 20%, which Logitech tells us means we have 2-4 days of use left before needing to recharge.

Personally, I am a bit paranoid when it comes to the safety of my expensive electronic gizmos, so the idea of having even the back of my Tab exposed for any period of time is sometimes worrisome, but the Keyboard Case's elegant handling of integrating the Tab into its design allows me to forgive that and the minor misgivings I have about the keyboard itself.

Overall, I am almost totally sold on this keyboard. Not only is it a functional, practical accessory, but it's well-designed, easy to carry, and doesn't create the extra clutter that many separate keyboards do. The one complaint I have is its price - the Logitech Keyboard Case comes in at $99.99, compared to the Samsung keyboard dock which goes for about $50 these days. In the grand scheme of things, however, $99.99 is pretty reasonable for a Bluetooth keyboard, and after using Logitech's Keyboard Case, there's no way I'd get the Samsung keyboard dock.

To summarize, it may be helpful to go over the pros and cons of the Keyboard Case again.

In the end, I would have to say I recommend the Logitech Keyboard Case whole-heartedly. Its slight flaws are not enough to overcome my fascination with its case functionality, battery life, lightweight yet sturdy build, and Bluetooth connectivity. If you want to pick one of these bad boys up for yourself, you can purchase them directly from Logitech's Website. Unfortunately they are out of stock at the time of writing, but Logitech promises to ship as soon as the product is available.