Tower Defense is probably one of the most populated genres in mobile gaming, or at least it seems that way. There are tons of games in this style to choose from, so it's rare to see something that changes things. Jelly Defense from Infinite Dreams attempts just that, putting a whimsical, almost cute touch on the genre of tower defense.

The game starts off with a brief intro story about the peaceful nation of jelly inhabitants in which the game takes place. Suddenly alien invaders arrive, and the player is given the charge of defending the jelly people's crystals. Right off the bat, the visual style and animation made me think of the popular Katamari series, especially when a colorful, blocky spaceship (ostensibly powered by rowing oars) zoomed into frame.

Soon after the intro, the player is plunged into a tutorial level. The game starts out slowly, with a few levels that only send 7 or 8 waves of enemies to confront the player. The pace quickly increases, however, as the player must battle giant jellies, and of course their innumerable minions.

Personally, I haven't spent much time with the tower defense genre in general, and therefore have little motivation to pick up many of the titles, but Jelly Defense puts a fun visual and stylistic twist on the genre, making it accessible to Android users who may have never tried a defense-style game.

Jelly Defense's gameplay is much like the gameplay of tower defense games we've seen before. Each level begins with a new map and specific areas where the player can build towers/weapons. Soon, the first wave of enemies appears and it's time to get building. Weapons can also be upgraded, or sold when money is tight.

When I first started playing, I didn't see anything new or exciting about Jelly's gameplay, but I soon noticed that some maps have "secret" items, and that there are mini-games which make for a nice break from the action of the main levels. One of these is the "Fortune Fields" level, which gives the player 30 seconds to collect as many coins as possible for use in future levels. Features like this, again, make the game more accessible to users who may not want a non-stop action experience in their tower defense games. 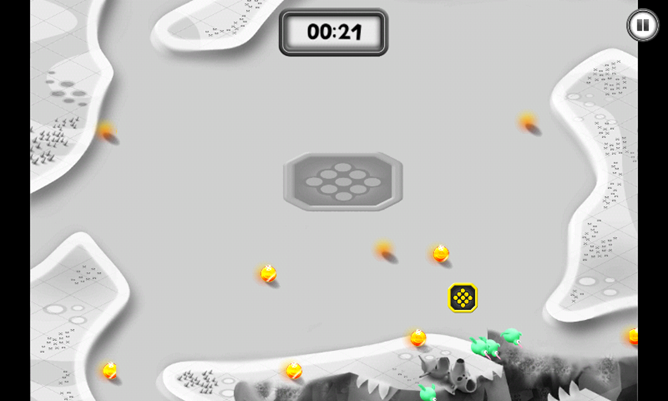 As you progress through the levels, more and more enemies appear. Jelly Defense allows you to see information regarding each of these enemies, a feature which is more fun and frivolous than anything. Of course, waves get bigger, faster, and more difficult, but your towers and weapons also get more diverse and powerful. Occasionally you'll battle a giant jelly enemy who, when defeated, flails about in a melodramatic - yet hilarious - fashion.  Humorous touches like these make the game more enjoyable and get a laugh or two during the action. 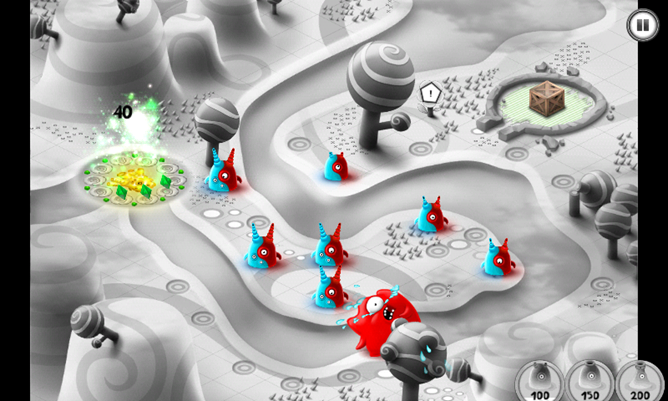 The game has a very distinct, thoughtful design, combining swaths of grey and white gradients with colorful monsters, coins, and crystals. The whole aesthetic, while representative of an organic planet, feels like jelly. Even trees occasionally bounce from side to side. The environment is cohesive and interesting, without having an overwhelming amount of detail or busy, distracting backgrounds. 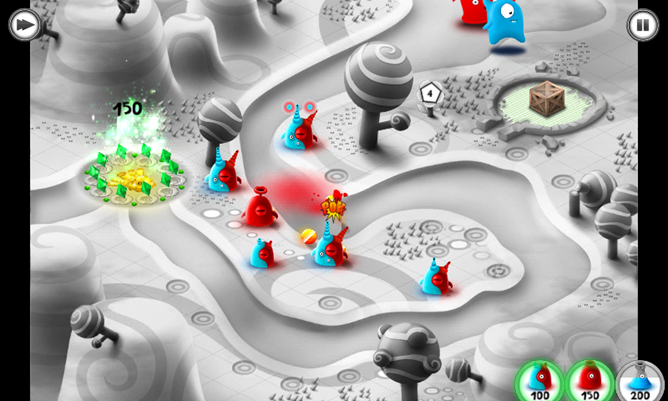 Overall, while I love the game's aesthetic, I'm not entirely convinced that there are enough original features Jelly Defense to truly set it apart from the crowd of tower-defense games. It has the same basic set up that we've seen before: waves of bad guys marching down a path while you destroy them with various and sundry weapons in order to protect something.

None of this is necessarily bad, however. While the game's basic structure may be somewhat generic, I think the visual style and storyline are lighthearted and cute enough to appeal to a wide audience, including those new to the genre. Additionally, features such as mini-games, and the ability to read "information" about each of the game's enemies are fun features that kept me interested in playing.

Jelly Defense just released today for a promotional price of $1.53, down from its planned $2.99 price tag. Considering the reasonable intro price, there's no reason not to get your hands on Jelly Defense and give defending the jelly nation your best shot!