When I saw the announcement by Samsung that they were bringing the Samsung Galaxy Player 4.0 and 5.0 portable media players to the US, I paused, and thought "Uh, why?" We have yet to come up with an answer.

That's to say, we're not sure what Samsung is thinking bringing a PMP (portable media player) product line into the United States, where the iPod Touch dominates that already-dwindling market to a laughable extent. PMPs are a product of the early smartphone era, where having a device that could make phone calls, store your music, videos, and play games was simply impractical because of technological battery and storage limitations.

Apple took advantage of that with the iPod, and absolutely ran away with the market. Whether you like to admit it or not, it was a brilliant product. Since then, there really has been no other PMP in the US which has come close to denting Apple's lead. Well, that's not entirely true, the iPod has seen shrinkage to all sorts of products which aren't exactly PMPs, namely: smartphones. Apple's own iPhone has led the charge in cannibalizing iPod sales because, let's face it, they're sort of the same thing.

iPod sales have actually begun falling (worldwide), and have since 2009: 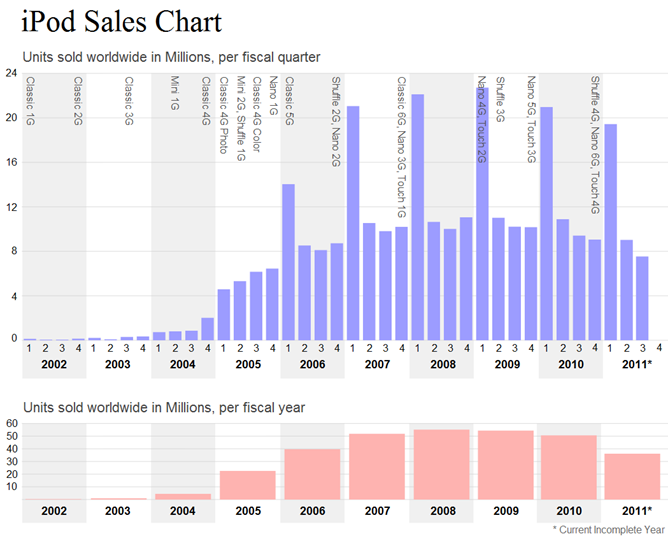 The market for PMPs is slowly self-destructing. Why? Smartphones have come to have better battery life, much more storage space, and vastly improved processing power. You can watch or listen to just about anything on a smartphone, so that has made PMPs a bit redundant.

Now, if you have a real juice-sucker like the HTC Thunderbolt or DROID BIONIC, using your smartphone as a PMP all the time will probably incur costs in the form of extra or extended batteries, which are a nuisance. Having a separate PMP might, then, be an alternative. But are individuals in those situations enough to ensure the Galaxy Player is a product which will actually make it off store shelves? We're definitely not convinced.

But we want to know what you think - is the Galaxy Player going to be a flop, or is there still room for a product like this in the States? Lend us your vote.