Football. The "beautiful game" full of highs and lows, drama and controversy, near misses and outright blunders. Americans call it soccer, but in England, where we have the best leagues in the world and the best fans to match, we know better than that.

It's only right, then, that we have a great Android application to match all of the football that goes on week-in-week-out, and thanks to the Football League Clubs' App, we may have just that!

The Football League app has been available for the iPhone since the start of last season, offering users a range of news, team player profiles and video content. This season, it's made the jump over to Android, and is a free download on the Market for anyone running Android 2.1 or later.

When you launch the app for the first time, you'll be prompted to choose a favorite club so that all of the information that is available can be tailored to your preferences. You can choose any club that's in the Championship, League One or League Two this season, so even fans of AFC Wimbledon will be able to get their news fix without any hassle. 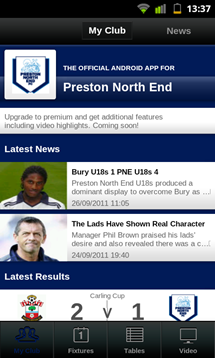 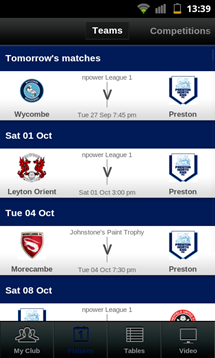 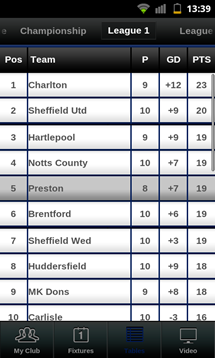 The app is split in to four sections: 'My Club', 'Fixtures', 'Tables' and 'Video'. As it's free, it is also ad-supported, but none of the banners are too intrusive; there is just a standard, small ad at the top of the screen and it doesn't obstruct any content that you might be reading.

The 'My Club' section of the app is effectively split into three different sections. The first is an overview of all the recent things happening at your chosen club. You can see the two latest news entries and previews of the story. If you want to read a story, you can tap on the thumbnail and it will open in full screen, allowing you to read it in its entirety.

Below the news snippets, you'll find the results from the last two matches played in either the league or domestic cup competitions, and beneath there you'll find the next two fixtures for your club as well. Tapping on a result from a previous match will load up all of the statistics from the game, including a text commentary, full match statistics and the starting line up and bench of both teams. 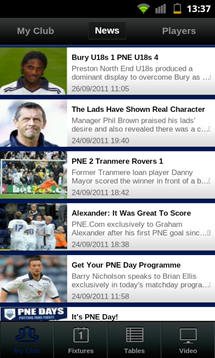 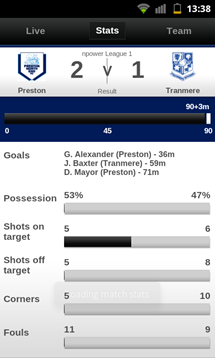 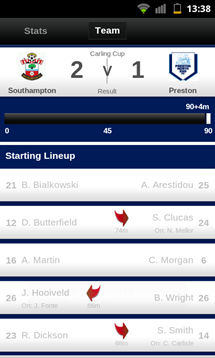 Having all of this information at the tap of a finger for free is a really great feature that no footy fan can pass up. If a game is currently in progress, you will be able to view live statistics and follow a live text commentary as it happens as well, which is really cool.

If you want to view more than just the two news snippets made available to you through the 'My Club' section, you can view the dedicated news page to get a lot more stories. Here, you can view the 12 latest stories to come out of the club, choosing any that you wish to read in full by tapping on the snippet, like you would in the previous section.

To help you catch up with all of the signings that have been made over summer, you can take a look at the players' section of the app, which will allow you to view profiles of every single player in the squad. Unfortunately, this part of the app doesn't look as polished as some of the others, as the pictures of each player are stretched and just don't look right at all. If the pictures can't be modified, then the placeholders that they are placed in need to be made a lot thinner so that each player doesn't look like he's on the verge of clinical obesity. 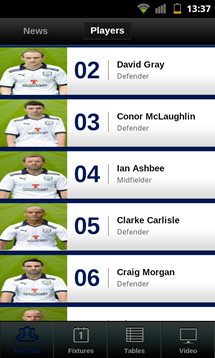 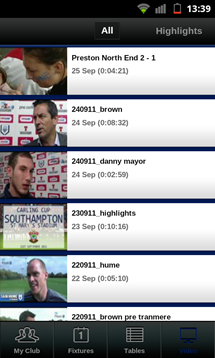 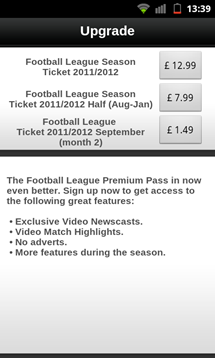 One of the major selling points of the Football League app is the 'Video' section, which allows you to view highlights of past games, as well as interviews with the gaffer and some players. Again, this could be such a great feature but it just doesn't feel polished enough. Some videos even have titles such as "240911_brown" which aren't at all helpful. If you want to view videos in the app, it will cost you £1.49 for the month, £7.99 for half the season, or £12.99 for the full season.

There's no doubt that this application has great potential, and some of the features would be even better with a few little finishing touches. It almost seems as though the developers were in a rush to make the deadline of the start of the new season for an Android release, some things such as the color of the text on tabs were forgotten about (when selected, the text becomes a deep, unreadable blue color).

Hopefully, in a few updates down the line, the Football League app will be an even better source of information for football fans, and as a free download from the Market it's well worth checking out.

Here's What Google Is Cooking Up For Ice Cream Sandwich (And Beyond!)