Bringing us familiar dialer features and fun design touches, GO Contacts EX is coming in at number four on our Hunt for the Best Dialer replacement for your Android phone. GO Contacts comes to us from the always awesome GO Dev Team, the developers behind other popular apps including GO launcher, GO keyboard, GO weather, and GO SMS (Note from the editor: If you haven't tried out GO SMS Pro, I highly recommend it.).

GO Contacts EX appears to be a simple enough dialer replacement, with all the features we've come to expect - the dial pad, call log, contacts, groups and favorites. GO executes its features smoothly and looks great doing it. Something that may seem trivial - but which I suspect has a lot to do with GO's success - is its design, especially the fact that it offers a swipe interface with various screen transitions to choose from. Being able to swipe anywhere on the screen to seamlessly go from dial pad to contacts, to favorites and back again is infinitely easier (and much cooler) than clicking individual tabs. 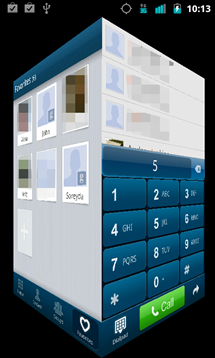 The first thing I want to say about GO's features is that they are versatile - the app's menus have a ton of options, allowing you to change a lot about how the app functions. 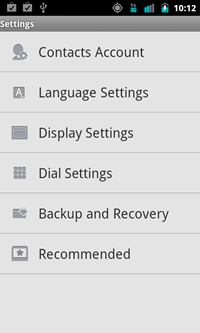 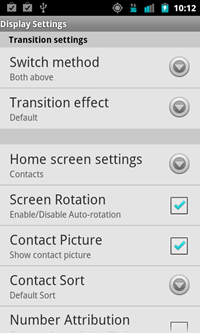 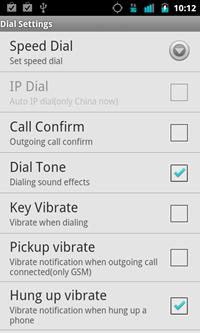 Of course the first feature to discuss when looking at a dialer replacement is the dial pad itself. GO brings us the standard dial pad with a clean blue theme (don't worry - there are tons of other themes available), the ability to search using number keys, and the familiar call log underlay behind it which will expand at the swipe of a finger. After swiping to expand the list, the user can sort calls into lists including missed calls, incoming, and outgoing, which is a useful feature when searching for a recent call. 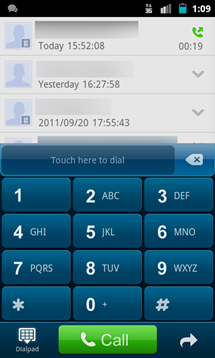 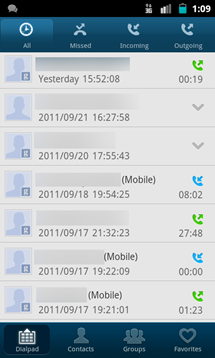 Next up is the Contacts tab. On the surface the contacts tab looks familiar enough, but GO has added some interesting features I haven't seen before. The first of these is the option of merging contacts. This will scan your contacts list for names, email addresses, or phone numbers that match and allow you to merge them to a single contact file. GO also allows for batch deleting, import/export of contact files, and more. These features were refreshing to find, as they proved that GO had more to offer than just the basic features. 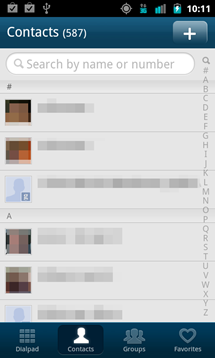 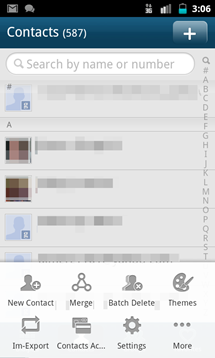 The Groups tab is not necessarily as exciting, as it is mainly comprised of the familiar feature's we've seen before. I normally don't use contact groups, but GO has added some really nice features to this tab that could convince me to make use of it. GO has made it possible to send SMS or email to all contacts in a group, which is really convenient when you need to relay a message to a group quickly and easily.

The Favorites tab is also what you'd expect, offering click-to-call functionality for a select group of contacts. One thing that I'd like to see added to this tab is the ability to re-order the contacts you've selected, but I can't complain too much, as the feature functions well and is useful either way. 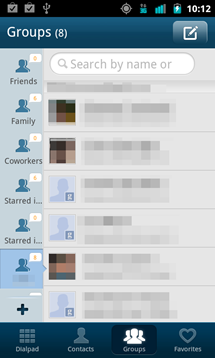 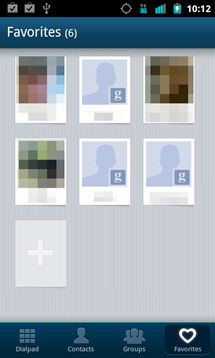 One major weak point I found with the app was that it was very buggy. Sometimes it worked great and other times the screen transitions would slow or stop altogether, which sometimes not only froze the app, but my phone as well. This may be device-specific, but it made the app unusable at times, and really isn't acceptable for an app that I'd use on a daily basis.

Bugs aside, I like GO Contacts EX. It is a simple app with an incredible amount of options for customization and theming. If it worked perfectly, I'd definitely consider it as my everyday dialer.

Overall I wouldn't count GO Contacts EX out as an everyday dialer, but the occasional bugs make me want to keep looking for something that performs more consistently. Hopefully with future updates the GO Dev Team can address some of these issues, making GO Contacts EX just about perfect as far as replacement dialers go.