Let's not beat around the bush here: the DROID X2 is hardly the star of Motorola and Verizon's DROID production, what with its PenTile display and CDMA-only radio. But then again, it's not a complete train wreck; and besides, who doesn't love a free phone? Oops, did I say free? I meant you actually get $50 back in the form of a gift card due to a promotion Amazon is currently running. Not bad, huh? 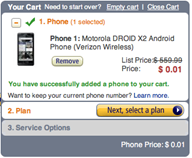 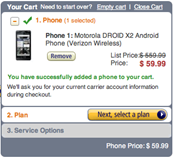 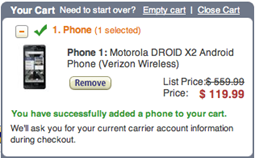 As you can see, that's precisely (or at least almost precisely) what Amazon's mobile division, Amazon Wireless, is doing: it's now selling the DROID X2 for just one cent with a new two-year VZW contract. If you're an existing Verizon subscriber on an individual plan and wish to upgrade your phone, Amazon asks for $59.99, and if you're upgrading a line on your family plan it'll be $119.99. As with all handsets purchased through Amazon Wireless, you'll be treated to free two-day shipping, and you won't be charged taxes in most states.

For those with less-than-perfect memories, the DROID X2's spec sheet looks something like this:

Interested? Hit up the source link to place your order.