Update: After receiving a distraught email from Team ACS, it has been brought to our attention that their root method may not be the cause of signal loss on the Epic 4G Touch. We're currently researching the details and will update this post accordingly.

Update x2: According to new information we received, there have been reports of this same issue happening on non-rooted phones. We're not sure how things got twisted around to point the finger at rooted devices, but we do know that Sprint is looking into it.

Have you rooted your Epic Touch 4G? Apparently, some users who have tried to flash Zedomax and ACS's custom kernel have experienced a loss of signal bug. Prior to the release of a flashable stock kernel, this was bad news bears, and Sprint is none too happy about it: 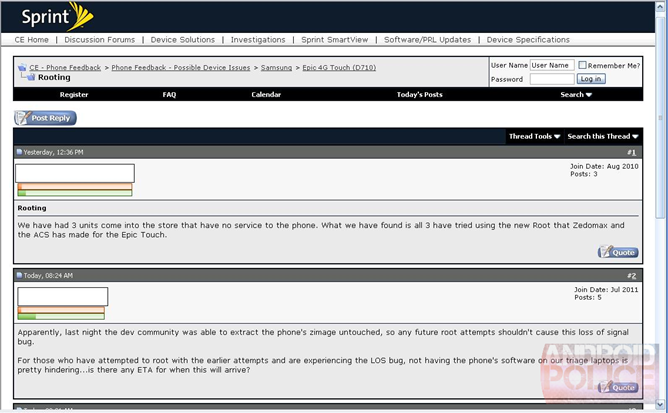 While there is now a fix, it's obvious what Sprint's concern is. For those who don't really understand what rooting, custom recovery, and "flashing" really are, the lure of "unlocking the potential" of your device can lead to some unfortunate consequences (ie, bricking your phone).

As the Sprint internal forum post above indicates, 3 such poor souls entered a Sprint store looking for a solution to this very problem. The (I assume) manager of that store is not happy about this, probably because he ended up replacing their handsets. This is because, as the second post says, Sprint stores have yet to receive the E4G Touch software diagnosis and repair tools on their handy Sprint triage laptops.

While this issue now has a solution, it shows the continuing tension that exists between carriers and the development community, and the frustration that phone hackery-gone-awry can cause.

Having Problems After Rooting Your Samsung Epic 4G Touch? Stock Kernel Is Now Available For Download