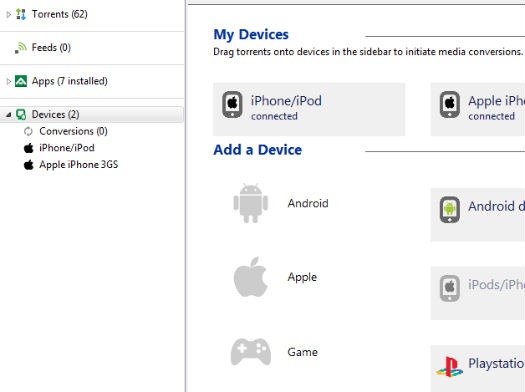 uTorrent also plans to add video and audio file conversion support in a later, paid version of their software, uTorrent Plus. These features are not new, however. Vuze, a competing BitTorrent client, added device integration and file conversion long ago and has seen great success.

It would appear that the development team at uTorrent is looking to follow that successful model, while still gaining revenue from it. I am left wondering, however, if I am the only one who finds it ironic that uTorrent would be selling a different version of their software, given the fact that the software itself allows users to download just about anything under the sun for free.

Regardless of whether uTorrent's recent improvements are a new concept, the BitTorrent client already has a huge user base which will almost certainly be expanded by the enhancements, despite the stable build release likely being months away.

If you'd like to check out uTorrent's device integration for yourself, you can download the alpha here.

Motorola Edison (Possible Successor To The Atrix 4G) Gets A Hands-On Preview - Set To Bring ...