Logitech is bringing its Harmony remote tech to Android in the form of the Logitech Harmony Link. For those that don't know, Harmony is all about controlling your home theater setup with as little effort as possible - imagine a universal remote mashed up with a computer and you're getting there. A hundred bucks gets you a Wi-Fi equipped IR blaster box and an app. The box receives commands from your phone over the Wi-Fi connection, and can relay that to up to 8 IR devices in your home theater setup. The Wi-Fi connection means you don't need line of sight to control the TV anymore, so if you want to turn off the TV from the bathroom, you can do that.

The phone app gives you all the normal remote control buttons, but the really cool part is the tablet app, which has really slick looking TV listings: 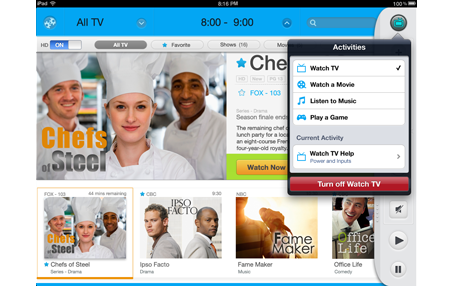 Our more detail oriented readers will notice that that's an iPad app. Well, that is indeed the bad news - for right now, the tablet app and TV listings are iPad only, though Logitech says they're working on that. In the meantime, the remote-only  phone app works just fine. It launches in October, but if that $100 is burning a hole in your pocket, you can preorder right here.