Looks like the just-released Samsung Epic 4G Touch is dealing with a few new-device hiccups. Both issues are relatively minor, but are noticeable (and annoying) nonetheless.

For starters, the calendar app may (or may not) force close when multiple events are dismissed at the same time. Secondly, if you're using 4G hotspot and take a phone call, it will kill the 4G connection. Of course, you can easily just re-enable the service at the end of the phone conversation, so it's only a minor inconvenience.

Sammy is aware of both issues and is currently working on a fix. 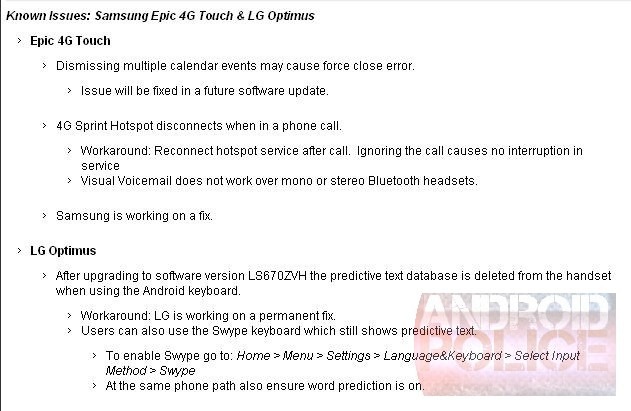 Similarly, owners of the LG Optimus S on Sprint who accepted the recent LS670VH update were also in for a bit of a surprise: it broke predictive text when using the Android keyboard. In all reality it actually deleted the predictive text database completely, but fortunately Sprint and LG are aware of the issue, and LG is currently working on a fix.

Update: From the look of it, this isn't the only issue with the Optimus S post-update. Hopefully LG is working on a fix for all of the issues.

Until then, Sprint is recommending users to switch to the included Skype keyboard, but any aftermarket keyboard should do the trick until LG is able to deliver a fix.