We've been talking about NVIDIA's Project Kal-El, aka Tegra 3, for a few months now, and the company has released some official whitepapers on the architecture and core benefits of the new chip. After reading through the documentation, I am left with but one thought: this processor is going to slaughter everything currently on the market.

One common misconception about new quad-core devices is that they're only adding two more cores. That's not entirely true, as the processor architecture as a whole has changed, adding increased performance and a reduced power footprint for each core.

This is even more of a misconception with Kal-El, as there is actually a fifth core, called the "Companion core." It uses the exact same architecture as the four main cores in Kal-El, but utilizes a lower power silicon for less processor-intense activities, such as active standby, music playback, and video playback. 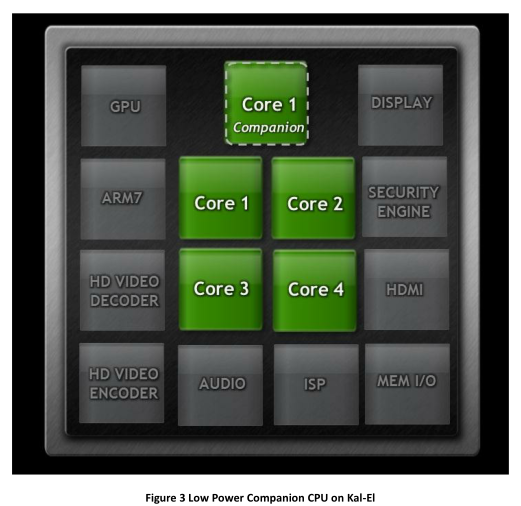 The Companion core, which runs at speeds of up to 500MHz, is automatically utilized on-demand, while remaining completely transparent to the operating system. The transition from core-to-core is handled mostly on the hardware level, and as processing demand increases, the Companion core is disabled and each of the main cores are activated as needed. 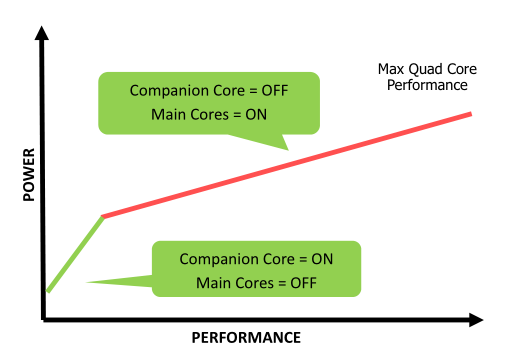 Once the processing demand has reached a point beyond which the Companion core is built to handle and the main cores take over, the CPU Governor will dynamically enable and disable the appropriate amount of core utilization depending on workload. 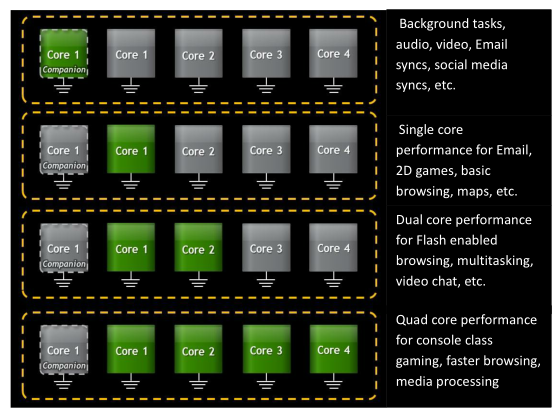 This method of CPU management is called Variable Symmetric Multiprocessing. It offers both performance and power efficiency optimizations over other methods, giving the Tegra III higher performance while consuming less power.

It's faster and more efficient

The main benefit of Kal-El is its new processor management -- but what does this mean in the real world? More play time and less wait time.

The web browsing experience of Kal-El is a huge step above what we currently experience on dual-core devices, and will be more akin to browsing on a desktop computer. Modern desktop browsers such as Chrome and Firefox are built to utilize multiple cores on a computer, creating a much smoother, faster experience. Kal-El replicates this feature, allowing multiple web scripts be to spread across the four cores, delivering a much more streamlined experience for the end user.

Thanks to the added cores, improved architecture, and advanced CPU governing, Kal-El will even offer a wider variety of tasks that can be accomplished using a tablet. In other words, it will be even easier to replace your laptop, as quad-core tablets will be able to handle more strenuous tasks like video editing, image processing, physics simulations, file compression, and audio/video processing.

Of course, the additional horsepower isn't just going to help us be more productive -- it's going to allow for more visually intense gaming, as well. Kal-El doesn't just bring a more cores to the processing unit, but a substantial boost to the graphics processing capabilities, allowing for a higher quality gaming experience (remember Glow Ball? -- perfect example).

This was really a brief overview of all the amazing things that Kal-El has to offer. If you really want to get your hands dirty, I highly suggest checking out NVIDIA's whitepapers on the matter -- they are both chock-full of in-depth details, benchmarks, and all of that other info that us geeks want to fill our minds with.

[Deal Alert] Bolster The Ranks Of Your Android Figurine Army For $9.93 Shipped