Next in our series of dialer reviews is a very popular replacement dialer called simply Dialer One, developed by Yermek Zhumagulov and available from the Android Market for free. It has a slick design with multiple theming options, and combines just about all the features you need into one screen, which seriously cuts down on time spent navigating around to find what you want.

I have a habit of talking a lot about the design of an app, but in this case there isn't much to say. The design of Dialer One is great. It's simple, clean, and interchangeable, including a black, white, gray, and 'wallpaper' theme (which makes the interface transparent, showing your own wallpaper behind it). The design isn't distracting, but gives the app an extra something. The interface is also pretty ingenious, giving the user buttons to access all the most common dialer features instead of separate screens. Strangely, the basic contacts list is only accessible through a quick series of touches rather than one centralized button. This fact was a bit frustrating because I generally use the contacts list more than other features when searching for contacts.

The first thing that meets the user's eye upon opening Dialer One is a dial pad and the familiar swipeable call log above it. The dial pad works exactly as expected, but I felt that something was missing from the call log. In HTC's Sense dialer (and others), swiping the call log will display not just the recent log, but enable the user to keep swiping to reveal a complete contacts list. In its current iteration, Dialer One requires the user to press Menu then Contacts to get to a full list.

The user can also search for contacts using the dial pad, which searches using numbers and letters. Incidentally, the user can also search using the dedicated search button, which brings up a keyboard. This seems a bit redundant, but sometimes using a traditional keyboard to search can be easier than using the dial pad. An interesting facet of this feature is that it searches your call log and contacts simultaneously, providing a range of results. 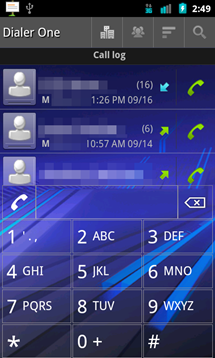 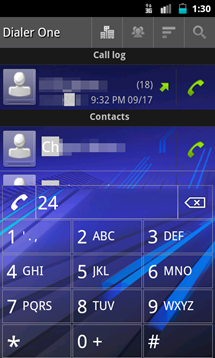 As mentioned before, Dialer One combines its features into a single screen (except the contacts list of course) and makes them available via a simple button tap. There are four buttons in the upper right corner of the screen, representing the user's options. The first of these is a button which will bring up a list of contacts sorted by organization. For me this option is unnecessary as I rarely add details such as organization (or even groups) to a contact file. I can see, however, that it may be useful for business users who need to search through contacts based on specific organizations. The next button shows contacts sorted by group, adding one more organizational option which, for me, is unnecessary. Finally there is a call log button, which gives the option to filter the call log on the main screen according to the interaction (whether the call was incoming, outgoing, missed, unknown, etc.). 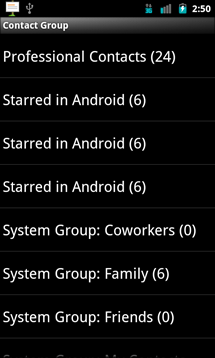 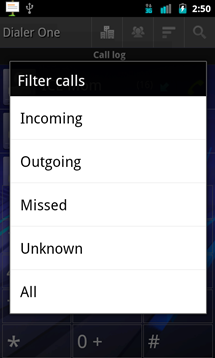 Dialer One has a couple of other features accessible by pressing your phone's Menu button. These are the contacts list and the speed dial list. In my opinion these features should have been included in the main screen's buttons, replacing the organization and group buttons. The good news is that one can set Contacts, Favorites, or Speed Dial to replace the call log in the main screen.

The contacts list is just what you'd imagine - a basic list of contacts. The app keeps the dial pad on screen until the user swipes up the contacts list, which I feel adds an unnecessary step to the process of viewing a basic list. Additionally, when scrolling through contacts using the scroll bar, there is no option to skip to a certain letter. In Android's stock dialer, using the scroll bar that appears when one swipes through contacts enables the user to scroll through letters of the alphabet rather than individual entries. This is a very convenient feature that I feel should have been included with Dialer One.

Speed dial is a fairly simple operation as well. From the contacts list, the user can long-press an entry, choose Speed Dial, and select what number the contact should be given in the speed dial list. Inside the speed dial list, there is a simple click-to-call functionality. I would have liked to have seen a few more options in speed dial, such as the ability to send an SMS message, but overall the feature works well.

Dialer One also has a "favorites" feature which will bring up a list of the user's favorite contacts, according to number of calls or interactions. 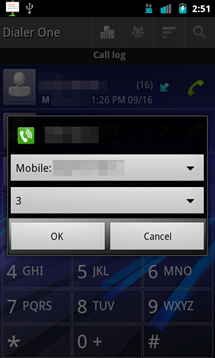 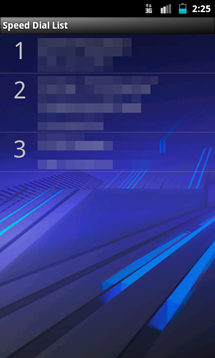 One great thing about Dialer One is the amount of customization available. The app includes options ranging from auto-rotate (separating the dial pad and call log into two panes), to adjusting "vibration duration." The settings list is quite long and detailed, allowing for a lot of customization that will fit Dialer One to suit your needs or preferences.

Dialer One is a good replacement for Android's stock dialer - there's no doubt about that. The level of customization, paired with the app's slick design and useful features almost have me convinced to keep the app as my primary dialer, but that isn't to say it's perfect.

Overall I'd say Dialer One makes a capable - though imperfect - replacement dialer app. Considering the fact that it's absolutely free in the Android Market, it's definitely worth a shot.

It's Official - Google Wallet Is Here, Handy App Can Tell You Where To Use It