A few months ago, I reviewed the Droid X2 and came away unimpressed. Performance was mediocre despite the powerful dual core Tegra 2 CPU, and more importantly, the PenTile display used by Motorola was a step up on paper and a huge step back in practice. Fast forward a few months and I've landed a Motorola Photon 4G (slightly behind schedule thanks to a few logistics issues, but better late than never!) I'm happy to report that despite seeming like it's almost the same device inside, it's quite a different beast this time around. 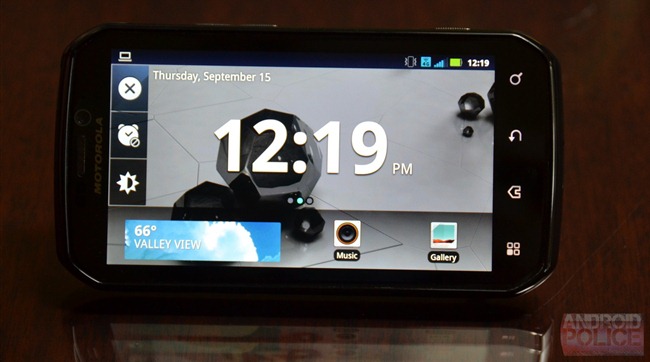 In A Sentence: A great, powerful device that can stand toe-to-toe with Sprint's other flagship phones.

You should buy it if: You're in the market for a high-end Android device on Sprint... especially if the EVO 3D has one too many D's and the Epic 4G Touch is too large.

I'm happy to report that nowadays, virtually every high-end device I get a chance to test has good build quality. The Photon doesn't disappoint in that respect - everything is snug and of high quality. The screen is Gorilla Glass, meaning it's nearly bulletproof. The sides are grippy plastic and the back is rubberized, so there's no fear of it slipping out of your grip. You'll find no give anywhere, and thanks to the design and weight, it just feels solid in-hand. Despite being marginally lighter than the EVO, I'd be less worried about dropping the Photon - and given just how many drops my EVO made it through undamaged, that's saying something. 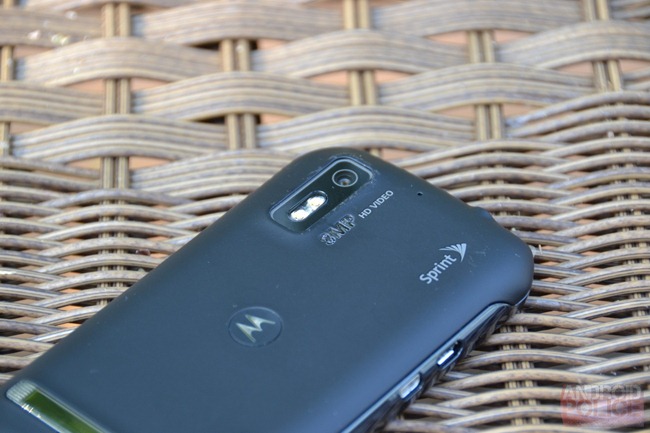 You'll find the power button and a 3.5mm headphone jack on top, the volume rocker and a camera button on the right, and microUSB and microHDMI ports on the left. There's a kickstand around back (a fact which is more awesome than it should be), and it feels substantially more solid than the one found on the EVO. Bonus: when you put the kickstand out, the screen comes on and goes into "Kickstand Mode," with a clock, the weather, and shortcuts to Music and Gallery.

As I said with the X2, although I have no issue with custom manufacturer UIs fundamentally, I'm not exactly crazy about Motorola's new non-Blur UI, unofficially nicknamed NinjaBlur. It does add some functional and moderately attractive widgets to the equation while altering the stock Android color scheme, thus providing a way for Motorola to differentiate its higher-end NinjaBlur devices from its lower-end vanilla Android offerings. That said, NinjaBlur still feels like it lacks that last bit of polish. The Photon is buttery-smooth until you hit the home screen with a collection of social feed widgets, at which point it stutters a bit, even if they've all been freshly updated. 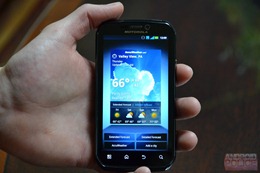 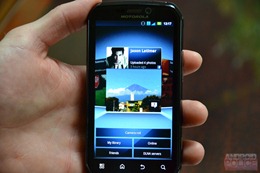 Personally, I don't dislike NinjaBlur, but I'm not crazy about the looks or execution. I'm not counting it against the device - especially since NinjaBlur is intentionally a light reskinning in order to allow for faster Android updates - but know that, in my opinion, it is also probably my least-favorite manufacturer UI.

As David noted with his review of the Bionic, a device also built by Motorola and using a qHD Motorola PenTile display, the company has stepped up its game in terms of the display's shortcomings. Though it still falls short of other display technologies, it's a step up from what was found on their devices as recently as a few months ago. 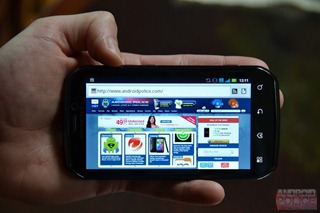 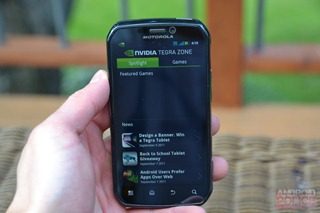 Every single major complaint I had before seems to have been improved upon substantially, though from what I can tell, none have been remedied entirely. Namely, the gridlines seem to be less noticeable, as are the individual pixels. Similarly, the issues with ghosting, color reproduction, and viewing angles are all substantially better, to the extent that I'd rate all three characteristics on par with non-Moto PenTile displays.

As with the display, performance on the Photon is a big step up from that of the X2, and the major issues I had before all seem to have been addressed. I'm unsure why performance is so much better on the Photon, but I'd guess it's either because of the additional RAM (1GB vs. 512MB) or the update to Gingerbread (Android 2.3). Regardless of the reason(s), it's impressive, and for all intents and (real-world) purposes, the Photon is every bit as fast and smooth as Sprint's Samsung Galaxy S II, the Epic 4G Touch.

Apps and games load quickly and the browser is smooth when set flash to load on demand. Even with all visual goodies enabled on full (read: non-mobile) web pages (including flash and images), it's still impressively smooth.

Ah, the only other big weakness of the Photon (aside from the screen): the camera. To say the pictures are a bit disappointing would be putting it lightly. 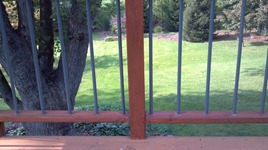 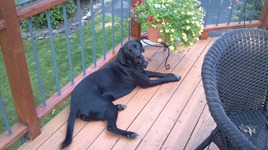 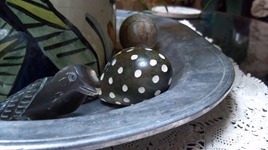 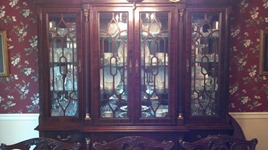 If you look at the pictures full-size, you can see that colors are almost universally off, detail is lacking, and most pictures are washed out. Even amongst camera phones, it's decidedly sub-par.

Things seem to be pretty solid on the connectivity front. Reception, including 4G, is always solid, and calls are fantastically clear and crisp - better even than the EVO. That said, every now and then, the device seems to put 4G to sleep even when it's enabled. This is probably a battery-saving feature, but you'd think the phone was going to disable 4G, it would enable 3G. Not so. Fortunately, it's a rare enough problem not to make a fuss of it - I think I've only encountered it maybe twice in the past 8 days, and it was nearly undetectable.

Thanks to the potentially blindingly-bright screen on the Photon, battery life can be great or can be terrible. Automatic brightness isn't especially bright, but even with brightness turned up a bit, you can expect to get through a full day of heavy use without much concern. Crank it up higher and you'll definitely feel the pinch, though - with brightness at (a very bright) 50%, expect maybe 8 hours of moderate use before you'll need some juice. (I didn't even test it on 100% brightness because it's almost painfully bright.) 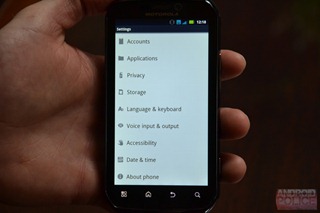 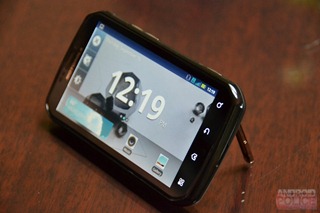 Motorola includes some additional options in the Settings menu to allow you to stretch out the battery life a bit more. I didn't bother tweaking them because the stock settings seemed to fit my tastes pretty well, but I'd imagine that you could really stretch things out by tweaking settings.

On the bloatware front, there's good news and bad news. The good: some of the bloat can be uninstalled. The bad: the especially annoying stuff can't be. Frankly, the only genuinely annoying piece of bloat is Sprint Zone, which Sprint uses to send you messages in 5 categories: My Sprint, Help, My Sprint News, Suggested Apps, and Device Tips and Tricks. It pings the Sprint server at a set interval and notifies you when they've posted new content. No big deal, just disable content checks for all 5 categories, right? Nope! You must choose one of the five categories. The best you can realistically do is set the app to check for updates only once per month for your single chosen category - the minimum allowed. Not really a big deal, but annoying in principle.

Oddly enough, if you connect the Photon to your PC and enable USB Mass Storage, some of your icons will disappear from your home screens. In my case, it seems to be just Tegra HD (THD) games, though somehow Fruit Ninja THD is excluded from the phenomenon. Even after disconnecting (and even rebooting) the phone, they don't reappear. Presumably this is because the content for the other games is stored in the part of the memory accessed by the same Mass Storage, and both can't access it at the same time. Still, that doesn't justify permanently removing the icons.

I have to admit, the Photon exceeded my expectations. So much so, in fact, that I'd undoubtedly recommend it to friends and family as a great alternative to the EVO 3D or Epic 4G Touch - certainly no mean feat. It's a solid package that delivers all around, with the only notable exceptions being a somewhat sub-par (yet still adequate) screen technology, a mediocre camera, and a minor bug with icons disappearing. Frankly, none of these shortcomings are deal breakers, and most consumers probably won't ever notice them (or particularly care). 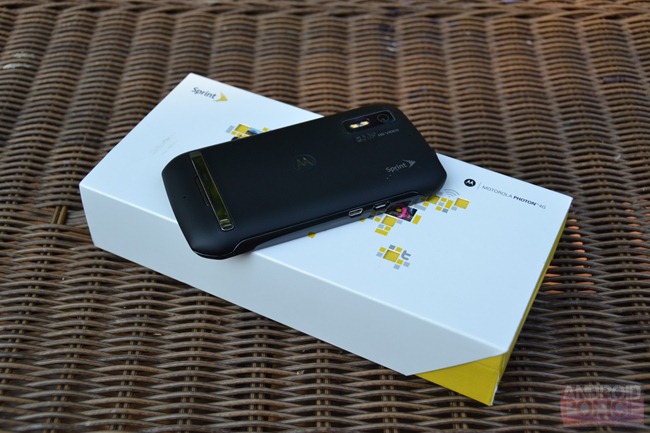 The final verdict: it's a great phone, and if 3D is not your thing and the Epic 4G Touch is too big, you won't be disappointed with the Photon.

Video: DROID BIONIC Boots Into CyanogenMod 7 For The First Time