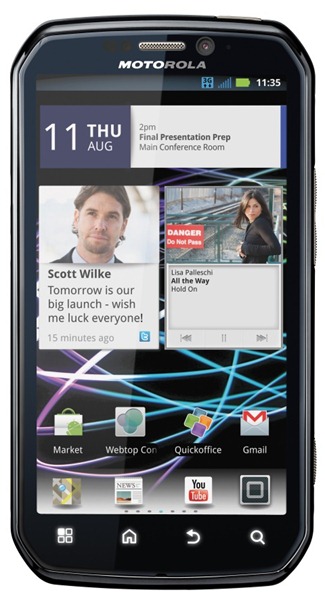 Congratulations, US Cellular customers, you just scored a pretty amazing piece of kit.

CHICAGO (September 12, 2011) – U.S. Cellular (NYSE: USM) announced today that the Motorola ELECTRIFY™ will join the carrier’s cutting-edge device portfolio later this month. The Android™-powered smartphone is designed to deliver the next generation of multi-media features and a powerhouse dual-core 1GHz processer for 70 percent faster overall performance1 and 75 percent faster browsing than leading single core smartphones2. With a best-in-class display, camera, webcam, loads of software applications and a dedicated media kickstand, customers will be able to seamlessly multi-task throughout the day. The ELECTRIFY will be available for $199.99 after a $100 mail-in rebate along with purchase of a data plan.

“The ELECTRIFY is more than a “smart” phone,” said Edward Perez, vice president of sales and marketing operations for U.S. Cellular. “Its multi-tasking capabilities make it the perfect personal assistant for customers who depend on their smartphone to meet the ever-changing needs of their busy lifestyles. Our commitment to providing a variety of devices that enhance customers’ lives is one of the reasons consumers who switch to U.S. Cellular join the happiest customers in wireless.”

The Motorola ELECTRIFY features a 4.3-inch qHD (Quarter High Definition) touchscreen and a kickstand for convenient hands-free viewing of high-quality movies, TV shows and videos. Plus, with HDMI output and full Mirror Mode, customers will be able to connect the ELECTRIFY to any HD screen (via HDMI cable*), so the entire family can enjoy the latest movies or hottest new Android games on their television at home.

The ELECTRIFY’s premium 8-megapixel camera with dual LED flash and auto photo-enhancing software will allow customers to leave their camera at home and still capture incredible photos and videos. The device also features a front-facing camera for video chat on-the-go. Customers can take and store tons of photos and videos with 16GB of memory on-board that can be expanded to 48GB with a 32GB memory card purchase.

With Motorola’s exclusive webtop application, customers can expand ELECTRIFY’s power to include a larger screen and full keyboard for amazing functionality and productivity.  Plug ELECTRIFY into the Motorola HD Station* and connect to an HD monitor to launch a full Firefox 4.0 browser, simultaneously surf the web, stream music, and run useful apps. Customers will have instant access to personal and corporate e-mails and will be able to download photos and videos in a flash on U.S. Cellular’s high-speed nationwide network, which has the highest call quality and network satisfaction of any national carrier.

Smartphone enthusiasts who switch to U.S. Cellular get unique benefits, like new phones faster without continuously signing contracts, free Battery Swap and valuable rewards points for simply doing things like paying their bill on time and referring friends. Points can be used for new phones faster, additional lines, devices, accessories and ringtones. Several of U.S. Cellular’s value-packed national plans are a perfect fit for smartphone customers. The $79.99 Primary Plus Plan is the best value in wireless and offers 5GB of data with unlimited text, picture and video messaging. The plan also comes with 450 voice minutes, free incoming calls, free nights and weekends and free mobile-to-mobile calls. A family of four who switches to U.S. Cellular can save more than $1,000 a year with the company’s National Premium Plus family plan.