With all the things that Android phones are capable of, it's easy to neglect the feature of the device that actually makes it worth carrying around instead of a tablet or laptop: the dialer.

Android's native dialer is super fast, but pretty basic. It works alright, but just doesn't add that extra something that brings making a phone call up to par with the rest of the things your phone can do. That's why we've decided to set out on the hunt for the best dialer. That is, the best dialer to replace the one that comes preinstalled on your phone. There are a ton of options out there, so get ready because this will be a long ride.

First up on our hunt is Rocketdial from Inteligeen. What its app icon lacks in style is made up by the shiny interface of the dialer app itself. It has plenty of nice features, but a few problems to work out as well.

Rocketdial is strikingly similar in design to HTC's Sense dialer, but with different colors and a slightly more chaotic interface. The dialer works for the most part, but there are some areas that need major improvement. Ignoring the bugs I encountered with Rocketdial for a moment, there are several redundancies within the app that could have been integrated more gracefully, and while the interface is thoughtfully designed, I'd like to see the option to change the colors, background, etc.

The app is ready to go as soon as it is downloaded, and the user is greeted by your (fairly) standard dialer screen, with a handy call history up top and number keys below; for those used to a stock HTC dialer, this will be familiar. From this screen the user can also search contacts by pressing the dialer keys. This will initiate a search both by numbers and letters, making contact lookup a breeze. 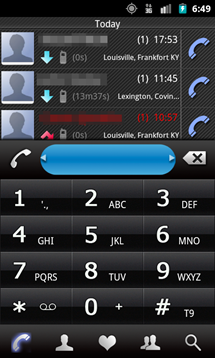 Next up is the contacts list. This is definitely your basic list of contacts with call buttons, and a special feature allowing the user to navigate alphabetically by swiping up and down on the side of the screen. 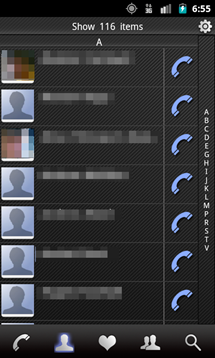 The favorites list is pretty simple as well. One need only press the "+" button to add contacts, then tap on a contact to initiate a call. This feature works simply enough, but I would like the option the stock dialer provides of clicking on a contact and having the ability to call or text the person at my discretion. 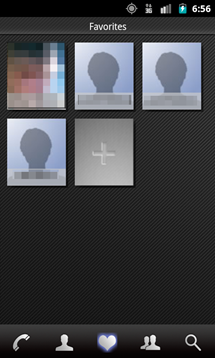 Next is the contacts group tab, which shows all of the groups you've created for contacts, and allows you to browse through them using tabs. I'm not entirely sure when this would come in handy, because the user can easily search from the main screen and single out one contact in no time. 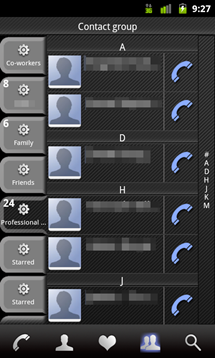 Finally we have the Search tab, which I thought had a lot of promise because of its gesture support. The letter recognition leaves a lot to be desired though, as it continually guessed wrong, and one must press and hold the search button to get to settings and delete the previous letter in order to give it another try. 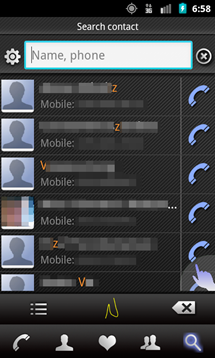 When the user hasn't actively selected to open the dialer, it still performs certain functions, like replacing the stock call screen, for example. I actually kind of like the call screen as far as design, but similar to other aspects of this dialer, there's a lot that could be improved. 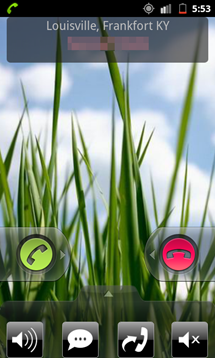 The call screen includes sliding-tab answer/decline controls, and makes the entire background of the screen the caller ID photo of the contact who is calling. If no photo is assigned, we get the lovely grass/clouds image you see above. A couple of nice features is its ability to show the location of the caller based on area code, as well as the pull-up tab containing some additional controls.

The first of these is a handy answer-on-speaker function that automatically enables speakerphone when a call is answered, followed by the option to ignore the call and instead send a text message. Next, is a somewhat odd feature that ignores the call and enters the incoming number into the main dialer, presumably for you to call back, though I'm not sure what the practical application would be with that. Finally, we have a silence button which also seems superfluous, as most devices can be silenced by hitting a volume key.

While Rocketdial's call screen looks nice, there are a few key faults that make the app almost unusable in day to day life. The most notable of these is that the call screen takes a while to come up when someone is calling you. It takes so long, in fact, that I often answered the call on the stock screen and, while in the call, Rocketdial's screen finally came up. Getting rid of it at that point was frustratingly difficult.

Additionally, if I used the ignore feature, the app would sometimes show that the call was still in progress for up to 10 seconds, which is both confusing and unnerving.

In the end, Rocketdial has a lot of good ideas, but they are rather poorly executed. I think with a little bit of elbow grease this could be a good alternative dialer, but it just isn't quite there yet. That being said, it's worth looking again at the overall pros and cons of choosing Rocketdial to replace the stock Android dialer.

So overall Rocketdial is a bit lackluster -- it functions, but not as well as I'd like. It has a good design, but it is not well enough designed to keep my interest. I think there are a lot of good concepts in the app, and it will be interesting to watch as the developers update/improve it, but it is not quite ready for every day use yet.