Since HP made its decision to -ahem- streamline their inventory of Touchpads via fire sale, Android users have been clamoring for the ability to run Google's mobile OS on the inexpensive (yet powerful) tablet. 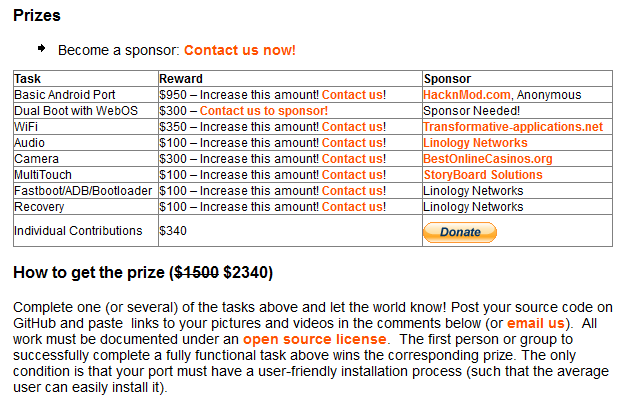 In the beginning, there were two primary teams working on developing a touchpad-friendly version of Android: Touchdroid and CyanogenMod. When the first video of CM7 successfully booting on the Touchpad surfaced, it was big news, despite the fact that next to nothing worked (not even the touch screen). This came on the heels of the discovery of Touchpads running Android 2.2 out of the box and the subsequent release of the system dump.

About a week later, team Touchdroid released a video of multi-touch working on the Touchpad, causing a huge stir. Shortly after that, the CyanogenMod team showed off an almost fully functional port (minus Wi-Fi) It was around this point that things started to turn sour.

Evidently the team at CyanogenMod had multi-touch running in their port before Touchdroid's announcement. Touchdroid was then accused of having stolen code from CM without giving proper credit and in fact passing it off as their own creation. Touchdroid countered that the code they had used was largely re-written from code found in a public and anonymous Pastebin.

This raises the interesting question of just how much of a case there is for the claim that Touchdroid plagiarized code, as it is hard to know definitively who the source of the public Pastebin was. Although it became obvious very quickly that it was CM code, the issue of whether CM has a legitimate recourse becomes a bit sticky. For the moment, CyanogenMod seems more concerned with actually getting a decent port to the Touchpad rather than dallying too much in the soap opera that unfolded.

The drama continued to escalate as someone released a chat log to Pastebin allegedly detailing conversations among members of Touchdroid in which they mention having code from CM, having inside connections with HP, and even suggestions of claiming CM stole the code from Touchdroid or claiming that one of their members wrote it himself. A shortened version was also released to highlight some of the more illicit statements.

Needless to say, this triggered multiple strong reactions. First of all, something of a war developed on Twitter, and Rootzwiki banned members of the project. Members of Touchdroid attempted to defend statements pulled from the chat log, as well as warding off the flurry of angry tweets headed their way.

The final reaction from Touchdroid was the decision to disband, officially announced at their blog, along with several members announcing via Twitter that they were out of the Touchpad development game. More importantly, however, the team also posted a dump of the code they had been running for the Touchpad for anyone who wanted to start development where they left off.

The average user may be wondering what the big deal is, considering that many developers use CyanogenMod code to develop their own ROMs. Essentially what the situation boils down to is the fact that Touchdroid did not give credit where credit was due, and after the release of the chat log, it became apparent that doing so was no accident. While CyanogenMod has expressed no interest in keeping the bounty for themselves if they win, Touchdroid's [former] motives remain unclear.

While this story has been somewhat fascinating to follow, the real news is that Android is still in the pipeline for the HP Touchpad, and I think that everyone involved would agree that that's what really matters. It will be interesting to see how development continues for the Touchpad and whether more developers will arise to face the task and provide alternatives to CM. With the release of Ice Cream Sandwich all but imminent, I'm guessing the Touchpad development scene will be alive for some time to come.

Official NFL App Comes To Honeycomb Tablets For The 2011 Season