With Verizon's Droid Bionic page having just gone live, it is inevitable that deals will begin springing up. Well, the first one didn't take long.

Amazon Wireless is now offering the Bionic on a new 2-year contract for $199.99 $179.99. That's a cool $100 $120 off the price that Verizon is offering direct from their website. The catch is you may have to wait a few days, as the phone is currently listed as backordered, but it'll likely change very soon (the Bionic did just get released officially minutes ago). The two-day free shipping is one day longer than what VZW is offering, but I think we can agree that $120 difference makes it worth the wait. 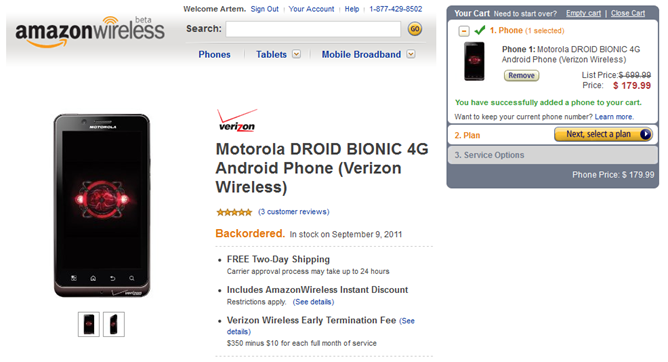 To reiterate, the Droid Bionic is packing some serious power. Here are some of its specs:

If you're looking for a deal on the latest iteration of the Droid series, grab one today at Amazon's discounted rate. Official NFL App Comes To Honeycomb Tablets For The 2011 Season