The @DroidLanding Twitter account has awoken once more, this time with news of an ongoing DROID Bionic scavenger hunt: 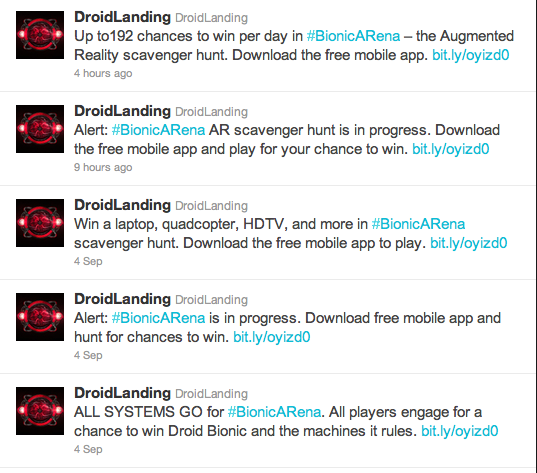 In previous VZW Twitter contests, the @DroidLanding account would tweet out the coordinates of a hidden smartphone and participants would hurriedly scramble to the location lest someone claim the prize before them. With this latest scavenger hunt, however, VZW has upped the nerd factor and brought an augmented reality-based Android game into the mix:

The app lets users 'build' four virtual Bionics before sending them off to a nearby location. Then the app becomes a compass of sorts, guiding users to said location and, once they are within 100 yards of one of the four Bionics, instructing them to virtually 'grab' it and thus enter the sweepstakes. Each game lasts 30 minutes, though that shouldn't be too much of a problem seeing as the sweepstakes last four days and you're allowed to play a whopping forty-eight times a day.

Better yet, the prizes are not limited to the DROID Bionic; players are also given a chance to win the Motorola XOOM, a 4G laptop, a 40-inch LED HDTV, or a 'quadcopter' (we're going to go ahead and assume that's a typo for 'quadricopter'). Impressive, to say the least.

The app can be downloaded on any Android handset, regardless of your carrier, so why not go ahead and give it a spin? And if you (gasp) don't currently own an Android device, there's always the online version of the game, though for obvious reasons navigation will be simpler on a smartphone.

Review And Comparison Of All Three Otterbox Cases For The EVO 3D - Defender, Commuter, And Impact