Yesterday, we announced Sentinel 3: Homeworld by Origin8 which hit the Android market as the third game in a very popular tower defense series, and the first installment to be available for Android. Normally I am not too excited about games of this genre, but I can honestly say that Sentinel 3 has impressed me both in terms of gameplay experience and sheer visual interest, thanks to the cleanly styled environments, visual effects, and smooth animation.

Sentinel 3 has three gameplay modes: campaign, endless, and classic. Each of them is a little different, and they each have their own merits. Before discussing these however we should talk about a few basics.

First, the game's environments. They are gorgeous. They are well-styled and clearly thought out. Although enemies approach from preset paths (often consisting exclusively of 90-degree angles), the action still looks smooth and organic, because there are enough set pieces to make the environment look convincing. 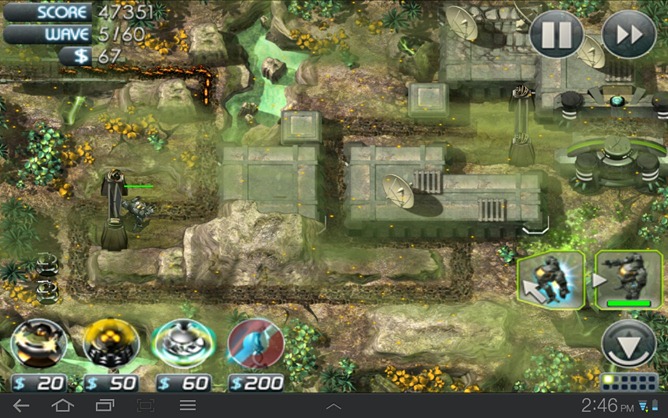 Next is music. The game has a great soundtrack by Specimen A, a group from the UK who make music "for all those gurning ravers out there who cant get enough of the 'wowowowow'." The music is a very nice touch. Unfortunately I'd rather play with the volume down most of the time because the game also has a sound for the death of each enemy, meaning you'll hear the same dying growl about a million times each time you play. That's a shame.

I know some of you will wonder about tablet support - it works (just check out our screenshots), but some graphics appear a bit washed out. I'm hoping Origin8 has higher-res tablet assets somewhere high up on their TODO list.

Should you choose to play campaign mode, you can expect an intense 20-level battle. Each level starts off rather slowly but each wave of enemies gets tougher and tougher, requiring the user to upgrade their defenses constantly. Occasionally you can sit back for a wave and just watch aliens and robots get demolished by gun turrets, bombs, or missiles. It's also worth noting that each gameplay mode includes a "commander unit" which is a little dude in a robotic weapon suit who acts as the last line of defense against enemies who threaten your towers. He can level up and become more powerful as you play through campaign mode, but stays the same in the other gameplay modes. Personally I like campaign mode best, as the feeling of completing a level and gaining new weapons and capabilities is always gratifying.

Speaking of which, the selection of weapons is not only diverse but entertaining as well. For example there are weapons like the "slow" turret, a machine that sends out pulsing waves that slow enemies down. The player can choose which weapons to equip for a given level in the armory, buying more slots using credits which come from points/money earned throughout the previous levels. 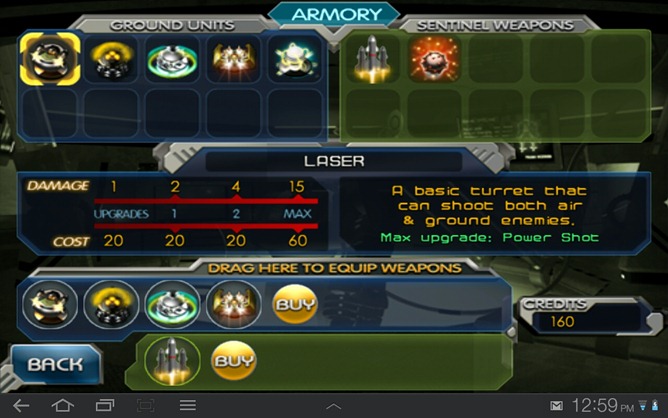 Sentinel 3's endless gameplay mode is interesting. It uses the progress the player has made in campaign mode as a base for the abilities the player has on "endless" maps, in which wave after wave of enemies will attack until the player is defeated. The object, of course, is to get the highest score possible before defeat.

As with all gameplay modes in Sentinel, endless mode is available in difficulty modes ranging from "Easy" to "Psycho." Although I would argue that judging by the fact that endless mode uses campaign progress as a basis for play, the difficulty necessarily changes even within each difficulty mode.

If you've built up your armory in campaign mode, this is a great option for gameplay, allowing you to pick up Sentinel and play a few waves here and there. 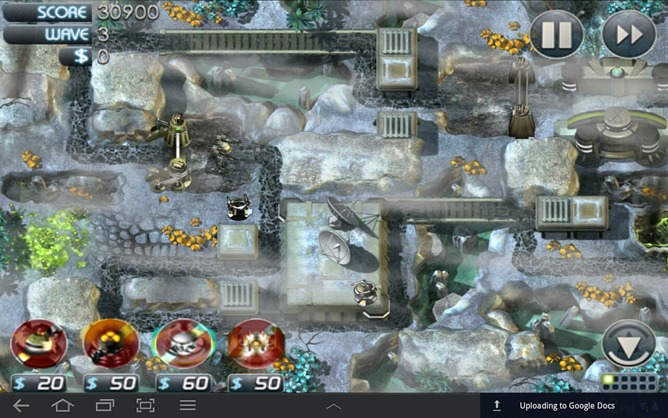 Classic mode brings a different (one might say classic) twist to Sentinel 3, giving you all the possible weapons for each environment and letting you loose with rounds of 60 waves each, emphasizing skills and tactics over firepower or simple point-gaining. Happily, classic mode comes in two varieties - assault or endurance.

Endurance mode for each map is only unlocked after assault mode is completed, and, as the name implies, tests your skills to their limit by prolonging each battle.

Classic mode also pushes integration with Open Feint, which may or may not be appealing to some of you. Personally, I don't mind it and knowing that I can compete with others is kind of cool and makes Sentinel feel like a more developed game. 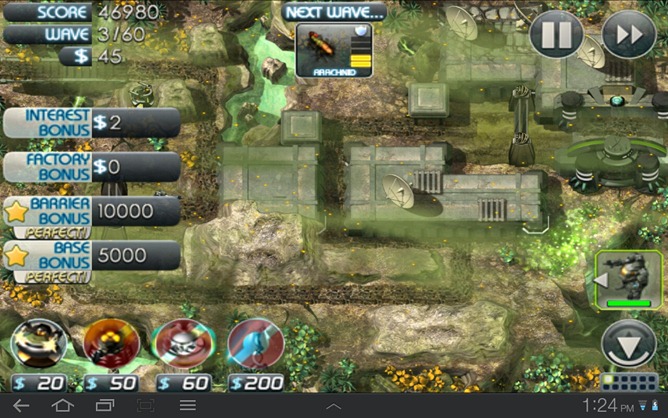 Before checking out Sentinel 3, I hadn't played much in the tower defense genre, and really had little interest in pursuing new games of the style. Homeworld, however, makes the genre appealing, and brings a great deal more than I had come to expect. Its gameplay is engaging and gratifying, and it has plenty of gameplay modes to keep anyone entertained.

For a price tag of about $2.00, Sentinel 3 is a game that really shouldn't be passed up.