When you stop and think about it, an app that could capture what is happening on your phone's screen in high quality mp4 format would be pretty useful. With such an app you could show off a neat new live wallpaper, make an easy to follow tutorial, or do a solid video review of an app - all without having to use a dedicated camera. Wouldn't it be sweet if such a thing existed?

Well, luckily for us, that exact app was released yesterday by Media Solutions. Screen Cast & Screen Recorder (and here's the free version) is the unfortunate name of a new video capture app for Android devices that makes showing off all that mobile power stuffed in your pocket that much easier.

Note: This app requires your device to be rooted.

The concept of capturing your mobile's screen in video format is not a new one. The popular screenshot app ShootMe has had this feature for a while now, but it left something to be desired. Unlike its predecessors, Screen Cast captures video at a frame rate higher than 5 FPS (ShootMe had option for up to 20, but the video captured ended up more like 4-5 FPS), with options of 10, 15, 21, 25 and 30 FPS. 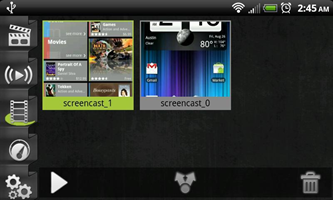 Screen Cast comes with a number of features and options for those who need to document their actions in Android land. You can choose what frame rate you wish to record at and what quality you want the video to be. It allows you to share videos from the gallery or run a benchmark to see what the FPS will be given your current settings. There is even a section to live cast your video feed, but that is still "Under Construction".

Taking It Out For A Spin

All the features are there, but "does it work?" you ask. Check out these sample videos and judge for yourself.

Here is an overview of the app's UI. It's a pretty simple layout but it works. In the video you can see live stream, gallery, benchmark and options tabs, as well as a little sample of a live wallpaper and app drawer scroll. When the video quality is set to normal you get a very smooth recording of your standard Android functionality

Next, I put the app up against some games, starting with a slower paced one. Screen Cast handled Cut The Rope expertly when the quality was set to normal. As you can see, the video is like butter. I mean, look at that confetti!

Screen Cast also managed to do well when recording a more frantic game, such as PewPew, at normal picture quality. The frame rate was such that you could still follow the action, even with such a high pace of movement on screen.

As soon as the picture quality was cranked up a notch, the frame rate suffered pretty badly. While still discernable, and a whole lot better than some other video capture apps, the video is almost unwatchable when things start to pick up.

Poor frame rate at higher quality is to be expected though, as there is only so much data that can be stored at one time. Some other minor quibbles I had with the app included some glitches when leaving the actual app to record some other activity (you probably noticed the lag at the beginning of the videos.) There is also no audio recording functionality at this time, which is why the videos were silent.

While there are a couple minor issues with the app, this is without a doubt the best video capture app out on the Market today. If you have ever found yourself reviewing an app, making a video tutorial or just showing off all the cool things your phone can do, I definitely recommend you grab the full version for $2.99.

The free version is currently limited to 30 seconds of video per clip, but this way you can try out all of its features without paying a dime.

Again, remember - your device needs to be rooted for Screen Cast to work. [Weekend Poll] What Is Your Ideal Phone Screen Size?