It looks like Sprint is changing the way things are done in order to keep up with the competition, which doesn't always translate into good news for the consumer. The early termination fee (ETF) is getting an overhaul that will go into effect on September 9th, which will bump the ETF on "advanced devices" (read: smartphones, tablets, netbooks, and notebooks) up to  a maximum of $350, putting The Now Network's policy in line with that of VZW and AT&T. If you're in mid-contract and are thinking of jumping ship, just take the remaining amount of months left in your agreement and multiply by $20 to figure out your exact ETF -- if you have less than 4 months left, though, you'll be spending a minimum of $100. 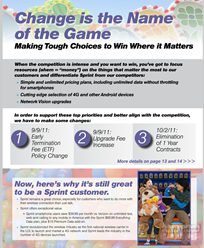 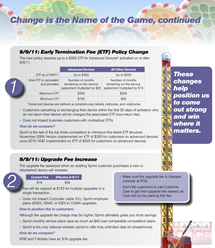 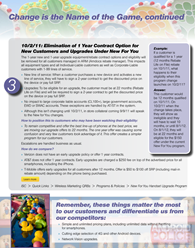 The upgrade fee is also getting upped from $18 to $36 on 9/9, which is quite a bit higher than the competition. In order to justify this price bump, Sprint is cleverly instructing employees to remind customers that they are saving as much as $40 per month over the competitors' plans and they have "truly unlimited' data.

To round out this bit of not-so-good news, Sprint will also be getting rid of the one-year contract option, leaving you with the all-or-nothing decision like most other carriers. Honestly, I don't see this as a major change, as most people opt for the two-year agreement anyway.

So, what say you, Sprintsters? How do you feel about these changes?