Since Verizon still wouldn't officially give up the upcoming Droid Bionic's release date, all we've had to chew on so far were rumors of the September 8th release date here and there (the latter was then discredited as an unofficial account by VZW, so it really has no credibility anymore).

To throw another rumor into the fire, one that seems to corroborate all the previous rumors, today the folks at Droid Attic dug up what seems to be an image of Best Buy's internal system showing the Bionic in stock on September 7th. While that doesn't necessarily mean it will go on sale right away, the dates line up quite well for the perfect storm on the 8th.

Oh, and while the image doesn't mention the Bionic by name, if we take a look at the SKU (3122039), we'll see that it matches up with one on a Best Buy catalog image Android Central dug up a while ago. 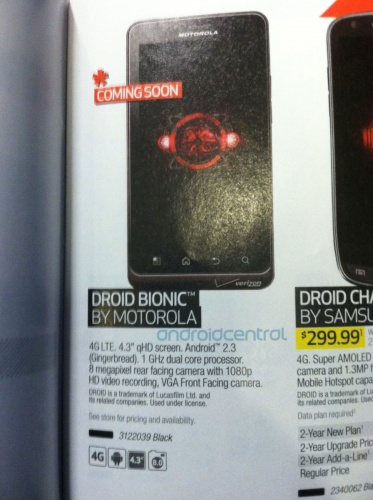 Those still interested in the Bionic who can't wait for the Droid Prime or whatever it may be called, you can pencil in that September 8th date in your calendar a bit more firmly now.