Samsung has taken a dramatic step today towards world domination and the death of SMS by announcing an intriguing mobile cross-platform instant messaging service called ChatON. Similar to RIM's BlackBerry Messenger and Apple's iMessage, ChatON will be Samsung's foray into the global mobile communications service connecting all major smartphones and feature phone platforms. There will even be a web client to facilitate conversations between mobile devices and PCs. Furthermore, according to the press release, ChatON will allow users to share text, images, hand-written notes and videos. Feature phones will have a basic app that will enable users to share text, pictures, calendar, contacts, and emotions. In contrast, smartphone users will have advanced features including the ability to view how often buddies communicate with each other and the ability to post comments on their friends' profiles. Users with the smartphone app can also create animated messages with handwritten notes and audio files. 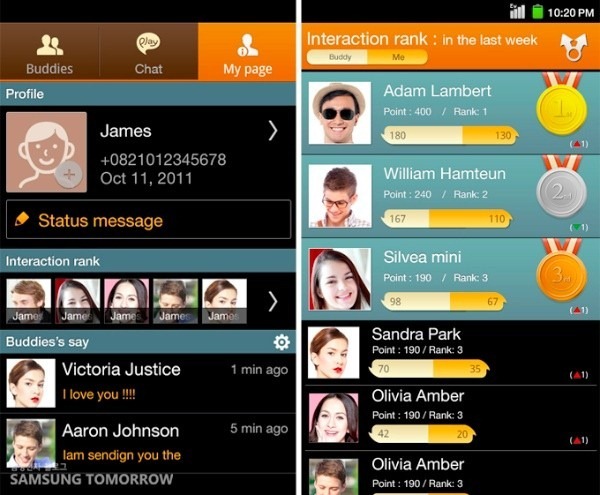 ChatON will be gradually available to all "major" smartphones, tablets, notebook PCs and Samsung feature phones in over 120 countries.

There are a few things that are striking about this announcement. Firstly, it is unclear from the statement whether this app will be available to all mobile devices, merely Samsung devices, or somewhere in between. The second paragraph states that the service will work  across "all major smartphone and feature phone platforms;" in contrast the final paragraph states that the service "will be made available gradually across all major Smartphones, Tablets, notebook PCs and Samsung feature phones." It appears that Samsung is interested in competing directly with BBM and iMessage, as well as create an SMS alternative that is free, ubiquitous and easy to use. As a result, it will have a huge advantage if it launches the service across all mobile platforms, including iOS, BlackBerry OS, Windows Phone, etc. However, knowing Apple's strict policy of blocking apps that "replicate" the features of native iOS apps, ChatON may never see the light of day on a fruity-device.

Secondly, what is most intriguing about Samsung's announcement is that with the launch of its Bada OS and now ChatON Samsung appears to be interested in leaving behind its purely hardware roots and join the software and services ecosystem, alongside the likes of Apple, Microsoft, RIM, and Google.

Finally, how will the launch of ChatON affect Android? Currently, Samsung only makes Android-based Smartphones and it is likely that ChatON will launch on these devices initially. However, I doubt that this launch will make any kind of impact. There are already a number of powerful cross-platform communications services such as Facebook's Messenger (formerly Beluga), Google's Huddle, WhatsApp, and GroupMe; thus, it does not seem like ChatON will be bringing anything majorly new to the table. However, once the service launches on feature phones it will enable a whole new group of users to communicate with their smartphone wielding brethren. This is a market that has not been breached by the likes of WhatsApp, GroupMe, BBM, or iMessage. In fact by becoming a ubiquitous communications platform that is available on virtually every device, mobile and otherwise, there is a good chance that ChatON will usurp these other services and become the dominant communications service.

Here is the demo video of ChatON in action:

ChatON is Samsung’s global mobile communication service that works across all major smartphone and feature phone platforms. ChatON lets users interact with friends and family, regardless of device platform – functionality across multiple platforms lets all users join in, with text, images, hand-written notes and video shared instantly. Users can chat in groups, while a Web client will allow the easy sharing of content and conversations between mobile and PC.

"With ChatON, Samsung has vastly simplified mobile communication by allowing users to connect to our upcoming feature phones and all major Smartphones in the market,"said Ho Soo Lee, Head of Media Solution Center at Samsung Electronics. “Users around the world can now enjoy easier and richer interactivity with whoever they want, in the format they want—this is mobile communication reinvented and democratized.”
ChatON, which is available in more than 120 countries supporting up to 62 languages, features two functionality options. A basic functionality option is available for feature phone users who prefer simple and easy usage, allowing users to share text, pictures, calendar, contacts and emotions through an easy-to-access client.

Smartphone users can enjoy advanced feature options, enabling richer communication by allowing users to see how often they communicate with their buddies using the Interaction Rank feature and post comments on buddies’ profile pages. Users can also create an ‘Animation message’ which allows them to create their own content by scribbling texts, adding audio and choosing their background pictures. All photos and videos in each conversation window can be viewed in an automatically-generated content sharing ‘Trunk’.

ChatON allows users to join and grow their social communities, socializing instantly and flexibly through their mobile device. Users can enjoy the benefits of ChatON globally, with free and easy communication possible with friends and family anywhere in the world.

Samsung ChatON will be made available gradually across all major Smartphones, Tablets, notebook PCs and Samsung feature phones, including forthcoming devices showcased at IFA 2011.

CyanogenMod 7 Makes Its Way To The HP TouchPad