The Nexus S is currently the most popular Android phone, representing 5.73% of the top 20 devices. Of course, the iPhone is holding on tight to the number one spot, with 13.6% of the impression share. Surprisingly, the Blackberry Curve is hot on the heels of the Nexus S, with 5.23%, the OG Motorola Droid is still alive and kicking with 3.94%, and the Blackberry Bold II rounds out the top five devices with 1.93%. Overall, an impressive 16 of the top 20 devices run Android. 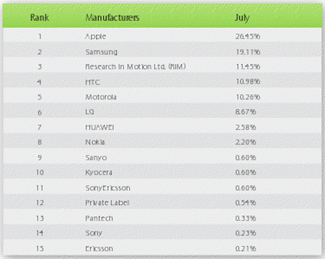 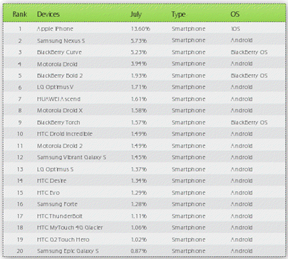 Similarly, Apple is the top device manufacturer, representing 26% of the manufacturer impression share. Samsung is gaining steam on a monthly basis, holding the number two spot at 19.11%, making up a 28% growth month-over-month. Rounding out the rest of the top five manufacturers is RIM with 11.45%, HTC with 10.98%, and Motorola at 10.26%.

Out of the overall smartphone category, Android is running on 61% of all devices, a 15% increase month-over-month. Despite only running on one specific hardware, iOS is still representing 21% of the market, with RIM right behind at 14%. Symbian and Windows Mobile/Phone 7 make up the remaining 4%.

Of course, these results are far from concrete and can drastically vary from study-to-study, as we've seen in the past.

The Stars Have Aligned - The First Samsung Galaxy S II In The U.S. To Arrive September 9th, 2011?