PhoneLocator is the latest entry in the Mobile Security App Shootout, coming to Android users from the developers at RVO. Another loss/theft-focused app, PhoneLocator has most of the normal features that we've seen before, but with a slight twist in functionality that may make or break the app for some users.

The app comes at a very low one-time payment of €1.99 (or about $2.84) and installs very quickly. The twist I mentioned earlier is that PhoneLocator has no online interface and therefore relies on your email address or a second phone number to relay information and receive commands. The fact that it relies on SMS commands can be comforting, because it means that no data connection is required to control your phone remotely. 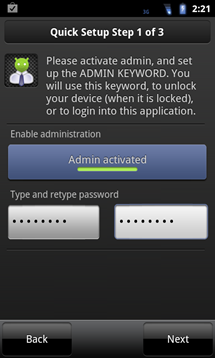 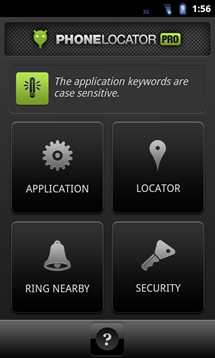 Because of PhoneLocator's SMS reliance, tablet support is a no go. This also means that the user needs a keyword to trigger each remote command. The app automatically programs a word for each command, but the user can edit them at any time. I would recommend changing the keywords to something esoteric, because ostensibly any phone can send the commands to your device. Additionally the user can add a phone number to the app, causing PhoneLocator to send information to said phone number.

The first feature PhoneLocator offers is location. Sending an SMS with the locator keyword causes a quick SMS response to the phone that sent the request, as well as an email to your inbox. The SMS and email are definitely sophisticated, containing information all the way down to speed, battery level, and altitude. On rooted devices, PhoneLocator has the ability to auto-enable GPS if it is turned off.

Next up is the "nearby" feature. This feature's keyword will trigger a full-volume alarm, the likes of which we've seen in just about every other security app so far, so there's not much to talk about here, except the fact that PhoneLocator allows the ringer to be protected by a password, which can provide some frustration for your phone's captor. If your phone is simply lost, PhoneLocator can be set to display its owner information, including name, email address, and anything else you'd like to add. 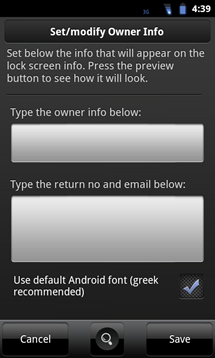 PhoneLocator also enables the user to lock the screen using a PIN code, in a similar fashion to previous apps, allowing letters, numbers and some characters. Unfortunately the lock function is one of the places where the app seemed glitchy and unstable, causing my phone to behave oddly. When the command reached my phone, the screen turned off, and upon turning it back on, nothing appeared but my task bar and wallpaper. Instinctively sliding my finger across the screen to unlock, I felt the typical haptic feedback, but again nothing was there. Upon performing a battery pull however, I was greeted with the lock screen and keyboard. PhoneLocator also allows for locking under many other circumstances, including when an unauthorized SIM card is inserted. 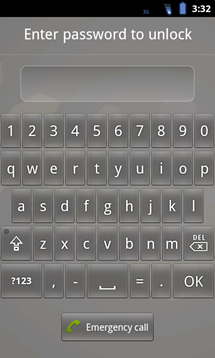 Also among PhoneLocator's host of features is the option to remotely wipe via SMS. However, this feature only works if the user has selected to wipe data under the security tab of the app. There is also an option to have a data wipe occur after a series of unsuccessful unlock attempts.

One feature that I found very impressive was the call log function. Upon sending the command, a report is returned containing a list of recent calls, but more impressive is that the report also contains the location from which each call was made.

Finally, the user can choose to hide the app from the app tray (reboot required) and the app can be revealed again by sending the reveal keyword via SMS.

Overall PhoneLocator is a robust competitor to other security apps on the market. It's helped by its SMS-based controls and plentiful password protection (almost everything can be password-enabled). That isn't to say that PhoneLocator is without its flaws however. Below are some of the general positives and negatives anyone looking for mobile security should consider before purchasing.

If your first priority in phone security is to make sure your phone is controllable even without a data connection, PhoneLocator is an elegant solution. If that isn't among your top concerns, PhoneLocator still functions brilliantly, and does all the basics very well. Personally I think receiving SMS and email reports and controlling my phone via SMS is the simplest way to do things, but I also appreciate a good online interface to have all the information together in front of me. Either way for the price of $2.86 the app is worth trying out.

New Nexus S 4G Version Of Swype Will Be Coming To All Handsets This Week, Minus Sprint Branding