The EVO 3D is easily one of the hottest phones on Sprint right now, and with good reason. It's fast, functional, fluid, and brings a lot of incredible features to the table, like 3D and Sense 3.0. If you've been waiting for a good deal to come along before dumping your current carrier and switching to The Now Network, now is the time, as Amazon Wireless is letting this 3D shooter go for $99 with a new two-year agreement. The deal is not as sweet for current Sprintsters, though, as the price is nearly doubled for a contract renewal ($180), which will still save you a bit of change versus the retail front. 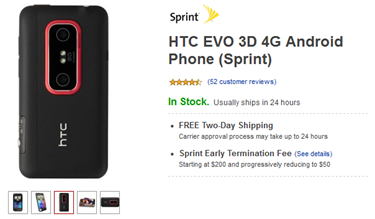 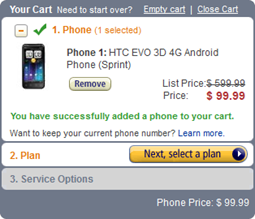 To take advantage of this deal, head over to Amazon Wireless, and don't forget that we're on the panel of judges for their current video contest, so make sure to check that out while you're at it!