About a month ago, I discovered that my favorite desktop file manager, Total Commander, had an Android implementation, written by the author of the program himself - Christian Ghisler.

If you need a recap of all the awesomeness TC brings to the table on both Android phones and tablets, and why it replaced Root Explorer, ASTRO, and all other file managers for me, go ahead and read [Total Nerdgasm] Total Commander For Android Is Very Real And Functional, With Root Support And Plugins - No Ads And Free Forever - I'll wait right here.

The app, which is currently not available in the Market but rather via download links found in the TC forum, was just updated to RC1 from Beta10, which means it's finally considered stable enough by the author for daily use (really, it was stable enough as of beta 10 as well). All plugins, such as FTP and LAN, were also updated, so you should re-download them after upgrading. 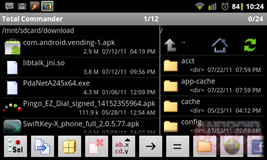 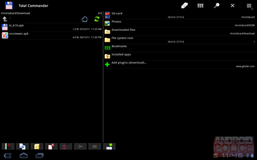 If you're curious about what's new, the changelog provides full details, but I'll tell you what I'm mostly excited about - no more annoying beta warnings upon every app start - an issue a lot of people complained about:

2011-08-19 Release v 1.0 release candidate 1 (RC1)
2011-08-19 Fixed: Subdirectories were not deleted and no second progress bar was shown when moving between 2 partitions, e.g. internal and external SD-Card
2011-08-19 Added: Button bar, new parameter "Extra0:": like "Extra", but no prefix "android.intent.extra." is put in front of the name
2011-08-17 Fixed: Copy&Paste of subfolders not working with a plugin (e.g. FTP) as the source or target
2011-08-17 Added: Option to skip all files in case of a read error
2011-08-12 Fixed: Corrected bug in jcifs library causing "Broken pipe" errors when LAN connection temporarily lost (SmbTransport.java: socket.shutdownOutput(); must be put in try/catch)
2011-08-12 Added: Do not show beta warning at startup any more since the program is now sufficiently stable
2011-08-12 Added: Internal "Installed Apps" plugin: Show version number and SD-card status in name, show install date+time
2011-08-12 Added: Try to handle files associated with Total Commander as ZIP archives
2011-08-12 Added: When a file isn't associated with any program and a user clicks on it, try to open it as ZIP
2011-08-12 Added: Parameter %M for first selected file in other panel
2011-08-12 Fixed: "Paste" not working when the other panel showed the contents of a zip/rar file
2011-08-12 Fixed: Add directory to subdirectory in zip -> names were added incorrectly
2011-08-07 Fixed: Intent org.openintents.action.PICK_FILE: Start directory not handled correctly
2011-08-07 Fixed: Handle low memory and stack overflow errors (e.g. in case of infinite loops)
2011-08-07 Fixed: Show error when libtcnative.so cannot be found instead of crashing
2011-08-07 Added: Notify media library (e.g. for media player) about copied, moved, renamed, downloaded and unpacked files (via separate thread)
2011-08-04 Added: New "home" icon by Samuel Plentz
2011-07-29 Fixed: Wrong dialog title when browsing for images in button bar change dialog
2011-07-29 Fixed: Language of items on home screen may be wrong at startup (timing problem of locale change)

The new RC1 will expire on October 30th, but by that time we should have a new version waiting for us fresh from the oven, and hey - maybe we'll even see TC in the Android Market someday, although according to Christian, this may never happen.